No drawer big enough to hold our 2015 ambitions

The first day of a new year is a day in which no ambition is out of reach. Everything seems possible. 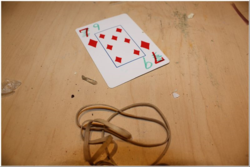 Which is why I know I am not just organizing a drawer as 2015 opens on the Kamikaze family - I am turning the page on an entirely new way of living. We are taking the proverbial first step of a 1,000 drawer journey: 2015 will be The Year of the Drawer. Probably just this one drawer, but still.

By we, of course, I mean me. The teenagers are perched atop a pile of Chipotle wrappers in the basement playing video games. Mr. Kamikaze is off napping in his Christmas pajamas somewhere. But I am setting the tone, laying down the first layer of our newly organized life - a life in which things make sense and every drawer has a "purpose", or at least a "theme" or at the very least "can be opened." Once the rest of the Kamikazes see how nice it is to live this way, they'll be all in.

I begin by declaring war on "The Everything Drawer." I know this concept has to be killed and killed fast because it cropped up recently in the basement, where new trends in slovenliness are franchised faster than you can sweep pistachio shells under a couch cushion.

"What's this?" I ask the girl upon discovering a drawer in the basement kitchen that contains hair brushes, toothpaste and cupcake decorating supplies. "It's the Everything Drawer," she says.

"There is no such thing as an Everything Drawer," I say. I try to sound firm, but there is no disguising the fear in my voice. What sort of new anarchy was this?

I drag a box up to the kitchen and pull open the drawer I have always thought of as the Takeout Menu and Pencil/Pen/Spare Key and Loose Change drawer where we keep the scissors. I take everything out and pile it on the floor where a quick inventory reveals we are also using it to store lettuce seeds and a rubber cockroach. 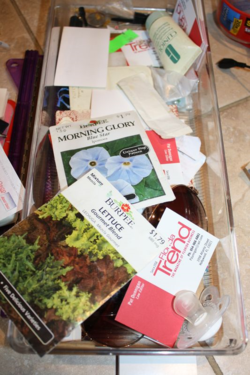 The cockroach I understand, but the lettuce seeds make a mockery of my denials. If you had asked me at gunpoint to produce a packet of lettuce seeds from somewhere in my house, I would have sworn it could not be done.

Still, a couple of seed packets, some breath mints, two rulers, an antique protractor, a roll of mailing tape, two wooden Easter egg ornaments, a giraffe-patterned pacifier, some first aid supplies, two flashlights, some old business cards, two last century cell phones, some hand lotion, a tube of lip gloss, an electronic wine guide, an assortment of charging cords for devices we no longer own, the remote control for an air freshening system we gave up on years ago and five pairs of eyeglasses are still a couple of playing cards short of "everything."  And while the 7/9 of diamonds I find at the bottom of the drawer might be doing double duty, it's still really only one card. I get rid of it anyway because I'm not taking any chances. 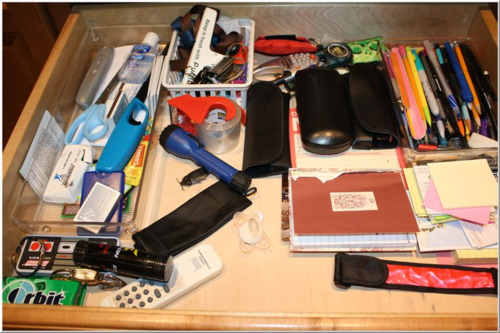 Photo: The Year of the Drawer, Day 1.

Posted at 05:48 PM in This Week in Delusional Thinking | Permalink

Took you long enough to find the rubber cockroach....

I'm crossing my fingers that this works out for you, this Year of the Drawer. It hasn't worked for me yet but maybe this year it will take and the rest of the heathens that live with me will begin to appreciate an organized space.

I know it's ambitious, but it's not crazy. The Year of the Closet would have been crazy. And yes, some of the things I took out of the drawer are still on the stairs, (sunglasses, charging cords, earbuds) waiting for the children to put them away in some other drawer, somewhere else, but that doesn't mean the Year of the Drawer has been a failure, no matter what Mr. Kamikaze says.

I know, I know, the Little Woman is always trying to get in my drawers.

A little rearranging can be a good thing in a marriage. Unless I'm wrong. In which case you should probably just vacuum once in a while.

I need to attack my attic. I fear it. Because my mother 'gifted' me all the stuff from HER attic when she cleaned it out, and now my mother's hoarding tendencies are invading my home. But if you can attack an entire basement drawer in a home with teenagers, surely I can face my attic……

How bad can it be? It is Day 2 of Year of the Drawer and no one has left a half-eaten bagel or a knot of broken shoelaces in my freshly organized drawer. Anything is possible.

It's the year of the garage here. It will take more than the week it took you for the year of the drawer. One advantage, we have no stairwell and leaving stuff out on the swale practically guarantees someone will take it. Hey, maybe I should just leave the garage door OPEN!

Like a garage sale where you don't have to talk to anyone. Perfect.