« Sneak Preview: New One Direction lyrics celebrate your mom's good taste | Main | To do and do not »

Tourist season on the Danube

Greetings from Budapest! Or, as they say in Hungarian ... something very similar - at least in the Intercontinental Hotel, where they speak mostly English and where I have not had the opportunity to use my six-word Hungarian vocabulary as much as I had hoped. 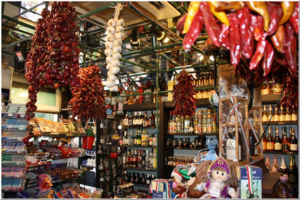 Still, I like to think that I have managed to soak up an authentically Hungarian experience, no matter what Mr. Kamikaze says.

Did you ever even leave the tourist areas? he asks when I arrive home with a suitcase full of palinka and tourist tchotchkes. Mr. Kamikaze's idea of a European vacation would be visiting the headquarters of the Hungarian Secret Police. In 1952.

But it's not as if my mom and I spent two weeks in Europe doing nothing but visiting biergartens and palaces. We also posed for pictures in front of fountains. We drank beer from giant mugs. We drank wine under patio umbrellas. We photographed our food. We bought paprika in Budapest and scarves in Bratislava. We drank white Russians in Vienna and thanked our waiter in a language that might have been German. We met some locals. They were from the Chicago area, but still.

We were photo-bombed by a Hungarian chef at a sidewalk cafe along the Danube. We drank Palinka and Unicum out of the minibar. One of us bought a coat in a shopping district full of Hungarian street cafes and fountains. It was from the Benetton store, but we paid for it in forints, which is authentic Hungarian spending money.

And if there is a more authentic experience than sipping apricot Palinka and reading Hungarian literature in Budapest, I would be willing to go back and try it.

Egeszegre! A waiter taught me that. It is some kind of toast. So yeah. I am practically a native now.

P.S.  You might be as surprised as I was to discover palinka in the archives. 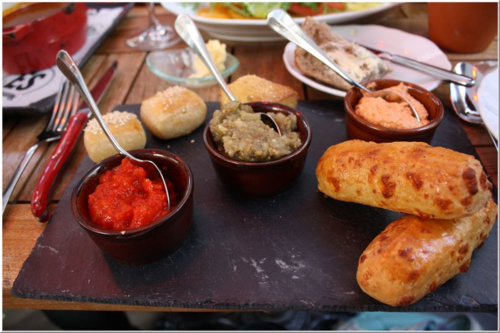 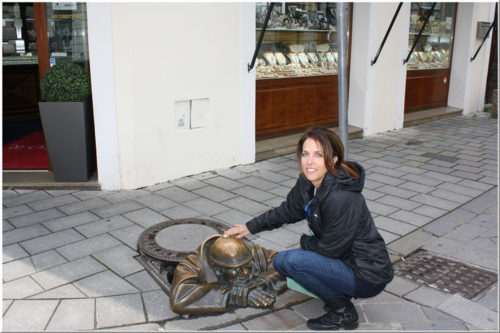 Photos: Authentic Hungarian souvenir shop, Hungarian charcuterie, dining on the Danube, meeting one of the locals in Bratislava.

Damn, woman! What a vacation!

Maybe it's just the palinka talking, but I have to agree.

Welcome back--You did get off the boat, out of the hotels, and not too lost in the books. Your shots are great!

A little lost in the books maybe, but still. For the next several weeks I will be working as an unpaid shill for the Hungarian Travel Bureau.