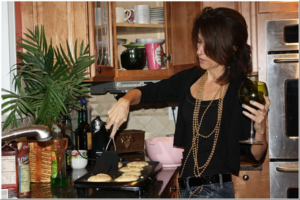 Posted at 09:07 AM in Confessions and bad advice | Permalink

Struthious. This is a recent favorite addition to my vocabulary. It means "of or relating to ostriches" and is an actual word that I did not make up.

It can be used in a sentence like this:

"Knowing her as he did, married to her for as long as he had been, it was only through the rigorous exercise of a struthious suspension of disbelief that Mr. Kamikaze could have believed for even one single second that Suburban Kamikaze had hand-crafted a chicken pot pie."

As for confessions, and speaking for most men and all husbands -- as I am clearly well-qualified to do -- you should realize that confessions are not a bad thing for a marriage. Indeed, they may be highly beneficial, when made directly to the offended Mr., while attired only in that little thing you bought at that place but never thought you'd really get up the nerve to wear. (I cannot speak to their effect when made on the internet while -- I'd guess -- wearing sweat pants.)

I plan to begin using it immediately. The word, not the little thing, which requires a little more, what is the word? Oh god, I am so tired. I am trying to remember when I washed my hair last. Do we have any olives? Oh yes, Effort.

For the record, Mr Kamaikaze has lived many years and therefore has collected enough wisdom to immediately recognize the retail significance of aluminum foil containers serving in support of chicken pot pies. The corn starch question was a trap.

Let's not lose sight of the fact that by modern culinary standards, not counting the kind of people who make chicken pot pies from scratch, I really did make that chicken pot pie. I think that is the takeout takeaway here.

I had to read this to my husband, along with the comments, because he, also, is occasionally subject to confessions of this kind… wherein I type the truth rather than saying it and discoveries are made at his leisure. It works for us. I'm glad it also works for others.

You are back! I have been checking every Sunday to see an update OMG how many years has it been, and apparently I missed a few, and there you are! I have always enjoyed your posts as a fellow Chicago area person, Mother, married to a man, drinker, (switched to vodka or gin because wine has too many carbs). I am happy to see you again.

Thank you! I hope to be back on the beat on a more regular basis soon.