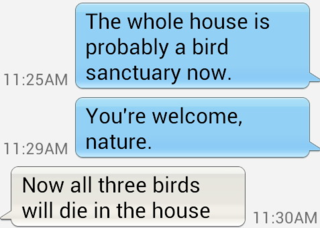 There is more to the story, of course. There is a very tall ladder involved, a climb to the second floor of the vacant house next door, some damage to a window, and possibly, an opening into the house through which other birds may now gain access, along with a squirrel or two. Maybe some rain. Probably nothing more troublesome than that.

But I think it's fair to sum it up by saying two desperately trapped baby birds were rescued and a frantic mother bird can now go back to reading the Book Review on the back deck, or whatever the bird equivalent is of that. That is the take-away here.

The women in our family have a history of bird rescue, against long odds, and even when ridiculous efforts must be made and 40-foot ladders moved to the side of other people's houses. If you don't remember, go back and re-read the inspiring story of Tweety and the Fourth Graders.

Mr. K. is out of town during the rescue, so naturally his first concern is for my safety. "Did anyone see you vandalize the neighbor's house?" he asks. Then he wants to know what I am wearing.

Posted at 08:53 AM in This Week in Suburbia | Permalink

Good journalism demands a follow up. Good thing Mr. K. is there now to move the ladder back (he should have foreseen this development) for an update. Only graphic novelists and kids are irresponsible enough to leave windows open on the second floor and walk away.

I assume by "follow up" that you are speaking of the welfare of the birds and not the location of the ladder, which is still leaning up against the neighbor's house, but on the ground. I do not know what became of the birds, although I do know that they are NO LONGER TRAPPED INSIDE THE STORM WINDOW, which has to count for something.