« 99 Reasons to Drink in the Suburbs #30: Budgeting | Main | The Teenager's Guide to Making Pancakes »

Though it is impossible in this part of the world to rule out snowfall at any point in the calendar, an undeniably summery feeling has settled over our house. 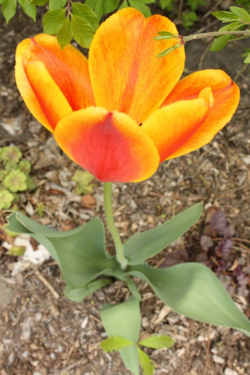 The boy is home from his first year at Bankruptcy U. in Southern California, the girl is preparing for final exams and yesterday I used sunscreen for the first time in, as the teenagers say, literally forever.

I pour some fancy-ish European beer into a glass and read teen dystopian fiction on the back deck, under a literally blue sky. It feels dangerously summer-esque, as if - dare I say it out loud? winter has actually ended. No one really believes that, but still.

At a backyard - the backyard! - cookout on the South Side a day earlier, someone remarks that next winter is only a few months off and we all laugh nervously as if that is even funny. Then we stuff our faces with tacos al carbon and scan overhead for snow clouds.

It is hard not to succumb to the sense of possibility a little bit of UV radiation can provoke, even if you know it's delusional and even if things are going badly for the intrepid young heroine facing down the tyrannical leaders of the future-century Chicago in your book.

My summer reading list is largely assigned by the girl, who inherited a family tendency to become a little pushy about books we like, which, in combination with her generally pushy disposition, makes it a waste of time to argue about anything she wants you to experience.

"You have to read this," she tells me. Once I agree - a foregone conclusion -  she monitors my progress relentlessly. "What is happening now?" she asks. "Have you reached the part where ---"

The concept of a "spoiler alert" is not something a 16-year-old girl takes seriously.

But it does not matter on the back deck, in the sun, with the fancy-ish beer. I have the entire summer to read Tibetan Peach Pie. First I have to finish Chi-vergent, and possibly the rest of the trilogy. Then I have to read the weepy cancer novel she has assigned me next. But after that, I can read anything I want.

Everything seems possible when the sun is shining and the children are all sleeping under my roof again. We could take a family vacation! We could get a dog! We could clear out the mountain of Chipotle wrappers covering the basement counter!

Okay, maybe not the wrappers. And definitely not the dog. Family vacation is a terrible idea. But the rest of it? It could happen.

Posted at 11:08 AM in This Week in Delusional Thinking | Permalink