« This week in Delusional Thinking: Pre-winter dystopian trilogies under blue skies | Main | Summertime, and the living is cozy »

The Teenager's Guide to Making Pancakes

Boy, Esq., who at 19 is essentially a fully-grown human, has zero interest in learning to make pancakes. His interest in pancakes stops and starts with the process of eating them.

So when he appears on the back deck Sunday morning and says "do you want to teach me to make pancakes?" I am immediately suspicious. And not just because he is wearing basketball shorts - and, more significantly, carrying a basketball. What's his game, exactly? 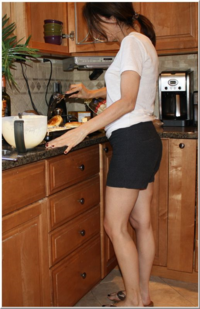 I look up from the Book Review, where I am making a mental list of books I believe I will actually read and stockpiling inspiration unrelated to pancake making. Experience has taught me a few things about this scenario:

1. It will end in pancakes.

2. The pancakes will be made by me.

Of all the cruel jokes biology has to play upon those of us born with the double-batch pancake-making gene, the inclination to feed our offspring is the most insidious.

While such an instinct plays a necessary role in the survival of the species, it also makes us susceptible to cons as obvious as fully-grown men pretending culinary curiosity while holding a basketball.

I give my son a look that says, "Please. I see through your crass manipulation of my maternal instincts." Then I start assembling pancake ingredients in the kitchen.

Manipulator or not, he's still my first-born. And he's here for only a few months before he will fly out of the nest again and back to the University of All You Can Eat. As hard as he is to live with, it's harder to live without him.

But first I will make him suffer a little. I walk out to the edge of the driveway where he is shooting freethrows. "Step One," I say. "Sift the dry ingredients."  I demonstrate with my big, pink mixing bowl - the one I bought in what I believed at the time was an ironic gesture. Who buys pink mixing bowls? But that's the thing about irony. It has a funny way of turning around on you.

I continue my narration. It is a recipe I know by heart. I've made Craig Claiborne's Basic Pancakes so many times, my New York Times Cook Book falls open to the page by itself. I've made them with blueberries; I've made them with chocolate chips. I've made them in letters to spell out their names. The page is butter spattered and annotated where one of my BFFs did the math for a triple batch. It's never enough.

"Then I add the milk and eggs and stir," I call out to the driveway. "Not too much or they will be tough."

Boy, Esq. acknowledges each step with a level of interest slightly below the threshold of actual, measurable interest. He does not return to the kitchen until the pancakes are ready to eat. Then he complains that I made too many with blueberrries and mocks the fact that none of the pancakes are actually round. "How hard is it to make a circle?" he says. He leaves a trail of syrup across the counter.

It's adorable and I make a mental note to look for some little molds. Before he leaves for college again I will make pancakes shaped like hearts and zoo animals. Balloons maybe. It will be an ironic gesture, but still. 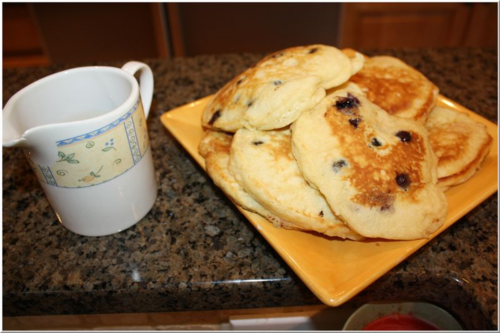 Step 6: Eat them all before your sister wakes up. Click on the photo for the recipe.

Posted at 07:45 AM in Boy, Esq., Casserole Recipes and Laundry Tips | Permalink

I could show you how to make them.

Yes, we have all fallen prey to that little tactic. And having them home for only a few short months...well yes, that's usually when you fall for it the most.

I fall for it so often I am thinking of laminating the instructions for boiling water.