« High-heeled tape dispenser spells the end of Casual Friday office supplies | Main | How you have disappointed me: a pie chart »

A) Boost your Test Score. B) Get the Girl.

It turns out that my expertise on the subject of romance may be limited to a relatively narrow demographic. In my defense, there is very little call for it on the ACT. 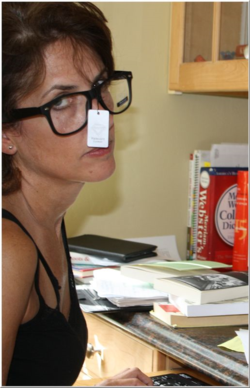 "Give her space," I tell the all-sport, high school Romeo whose girlfriend has recently benched him. "No big gestures."

He had gone from apologizing, to begging for forgiveness, to contemplating a campaign to win her back. As his college entrance exam tutor and a woman barely 30 years out of high school, I knew he was making a mistake.

"You're overthinking this," I said. "It looks like chemistry, but it's really just a logic question."

It was just as true in romance as it was on the ACT science test. I was sure of it. Plus, I had the answer sheet right in front of me.

When it comes to getting the girl back, less is more. "More" telegraphs weakness, whereas "less" is the stuff that makes people want "more." Also, there are so many ways the grand gesture can go wrong. I didn't have time to enumerate all of them and bring his ACT score up.

But later, as I recount my sage advice to Girl Kamikaze, whose credentials include actually being a teenage girl, I get back the look she uses to signal that I have just said something so mind-bogglingly stupid it isn't even worth tweeting.

The correct answer, apparently, would have been this: Take your biggest idea, then multiply it by a factor of too much.

According to the girl, whose instincts have been honed in a graduate degree's worth of Zac Effron movie deconstruction seminars and "literally" millions of YouTube prom proposals, the only way the Big Romantic Gesture can go wrong is by not being big enough.  Assuming it has been vetted by a committee of her 200 closest friends.

It seems so obvi to me now; I can't believe I missed it.

There are limits of course, to what an ACT tutor can do for you, even one whose command of pronouns is as solid as myself. But I really should have subcontracted this one right from the beginning. I know that now.

Posted at 09:20 AM in Ask the Suburban Kamikaze | Permalink