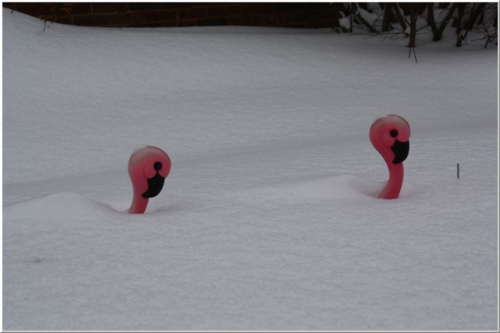 We are up to our flamingos in snow. I would like to apologize for the quality of the photo, but the truth is, I don't care.

I could do better, but that would mean going outside again, taking off the lens cap, adjusting the focus, depressing the shutter - all at a distance of about 75 feet from where I am currently sitting. Which might seem like a small effort. 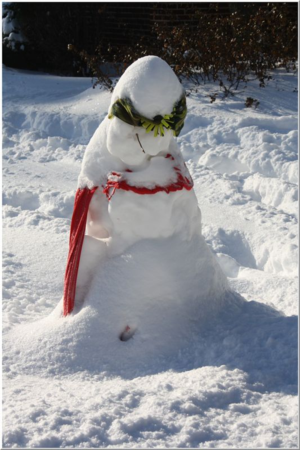 But here is the thing about winter in Greater Chicago: There is a point at which you are lucky to sustain the will to live, let alone manage to care about something like photo quality.

And that point was last winter.

You may think you've heard everything there is to say about the so-called "Chicago winter" from both sides of the debate. But the truth is, there is no debate. The people who write those columns about "the beauty of winter" or about how bone-freezing wind chill builds character? They're not even real.

The majority of those columns are commissioned by the city's tourism shills and produced in third-world sweat shops, where polls show 100 percent of the region's actual residents would prefer to be right now. The rest of them are phoned in by newspaper columnists on vacation in Miami Beach as a way of irritating their colleagues who have frozen in place waiting for the train, which, incidentally, is running 20 to 30 minutes behind schedule because transportation officials know that 19 minutes on a train platform in -20 degree temperatures leaves commuters with sufficient hand strength to text a complaint.

Along with things like most of your body parts, the other thing that freezes over in the winter is your motivation to do anything about anything. Even complaining starts to feel a little ambitious.  Every one of those stranded commuters is making plans to complain. But eventually, somewhere between minute 19 and minute 25, they become so desperate that when the train shows up only 35 minutes behind schedule, they are grateful.

The worst thing you can actually experience in the winter in Chicago is a spark of hope.

These are the days in which everyone you see wears an expression of unconditional surrender. Neighbors communicate in grunts and eye rolls. People shovel their sidewalks and driveways with the enthusiasm of prisoners on a rock pile. Don't try to pitch your story of character building to these people unless you are standing at least a shovel-length away. 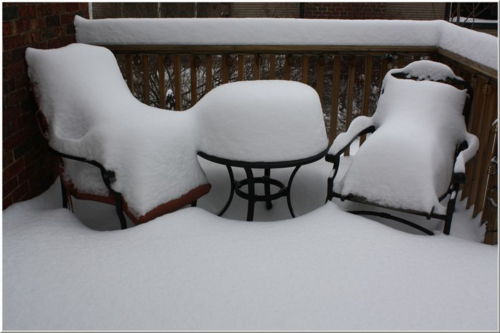 There went the neighborhood with that flamingo shot.
Hope you aren't subject to an HOA!

Some days those flamingos are the only thing keeping my hopes alive.

They were a gift from unknown and presumably teen-aged vandals who planted them as part of a toilet papering job. We keep them up as a tribute to teenagers everywhere.

And here I was about to commiserate about the weather....and then I realized you are in IL and I am in NC. No comparison. Despite the fact that I can't feel my toes, I won't complain because my patio furniture doesn't have any snow bedecking it.

If nothing else, you are "taking one for the team" - there. Don't you feel better?

Sorry, can't relate. Even birds and Canadians know enough to fly south for the winter.........

I thought they were a little reminder of Florida...but not when they are buried in snow!

I am eight days late to this party (don't the flamingos signal there's a party somewhere?!?!), but I just have to say that the flamingos up to their necks made me laugh. And cry. And pour more wine. We are so snowed in that I can barely pull into my driveway around the hunormous piles at its foot. So I really needed the laugh. And the wine. Thank you.