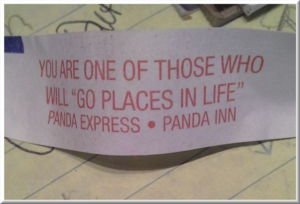 It is no surprise to discover, alla fortune cookie, that I am one of those people who will "go places in life."

People are always telling me this, and I have to assume, despite the superfluous punctuation, that it must be true.

Some days it seems as if there is no end to the "places" I go. Places like "Panda Express," where the girl and I order three styrofoam serving boxes full of starchy Asian fast food that we bring home to eat/spill in "the living room" while watching television "on the couch."

We argue over whether or not it is acceptable to eat directly from the styrofoam serving box and also whether we should watch the Winter Olympics or another episode of The Vampire Diaries, which some of us maintain is pretty much the same episode over and over and over again. It goes "nowhere."

We end up watching vampires because only one of us actually knows how to operate the remote. One of us, who is 16, eats directly from the styrofoam serving box while the other one, who is not, uses a plate, which she washes and puts away afterward, because that is sort of a rule in our house, in the sense of "something one of us likes to say a lot."

We cover ourselves in blankets and watch bad television as the snow comes down outside. We eat a lot. We are a mother-daughter eating machine.

There are no leftovers, except for the extra box that we thoughtfully filled and brought home for Mr. Kamikaze, who is out working "somewhere," and we even eat part of that, even though one of us had argued against going to "Panda Express" in favor of making shrimp alla marinara from The New York Times recipe, which would have meant going "nowhere" and, looking back, was never going to happen.

We didn't need a fortune cookie to tell us we were going places.

Posted at 09:07 AM in Girl Kamikaze, This Week in Suburbia | Permalink

Same thing in my house, except it's a boy and it's all Top Gear, all the time. Which - if you'll forgive me - I much prefer to anything "Vampire".

I am tempted to say that someone really needs to put a stake in the vampire thing, but then I would really be contributing to the problem. Vampire Diaries makes too much time spent with a teenage boy seem like it went by too fast.