« Girl,15: An Overview | Main | Happy Holidays from the Kamikaze Family » 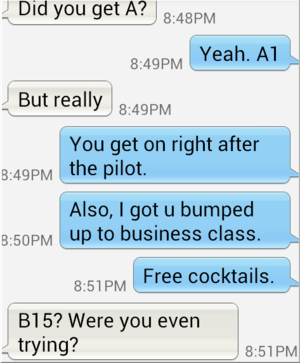 My mother said he would be completely different when he came home.

But something told me I would recognize the college boy who got off the plane last night. And that something was the text he sent after I failed to check him in for his flight fast enough to allow him to board with the first group:

I hadn't seen him since leaving him in Los Angeles in August. But it seems like only yesterday I was cleaning his room, stocking the refrigerator with food he will leave half-eaten in various places around the house, and listening to him complain about our holiday plans. Why would I make plans that force him to spend New Year's Eve with his family? What was I thinking?

I don't know what I was thinking. I haven't really had time to think about it. It's been a busy four months since I said goodbye and watched as he walked away across the USC campus.

The next few hours were long and a little weepy, and I wondered, what would life be like without him? Then he called to remind me he had left his goggles and swimsuit at home and wanted to get in the pool right way. Could I get to a sporting goods store and back to campus before my flight left?

He told me not to worry. His Dickensian childhood had left him well prepared for such hardship.

"I spent my entire childhood scrabbling through the refrigerator searching for unexpired food," he said.

Oh god. It is the saddest thing ever. It is impossible to number all of the ways in which I have failed him. But I know it's at least 15.

Sounds like the Festivus "Airing of Disappointments." Happy holidays.

Nah, he hasn't been gone long enough to be unrecognizable. And if he's anything like mine you will actually be ready for him to go by the time it's time for him to go again. I kid, I kid...kinda.

We have more disappointments than we can celebrate: David Copperfield is starving (again). His sister, Veruca Salt, is the last teenager on the planet without an iPhone.