« It's cold. | Main | What Not to Wear Teen Edition: If you can find it, you probably shouldn't wear it »

In the course of a recent interview for the cover of PTA Mom Weekly, I was asked what "Suburban Kamikaze" even meant.

It stumped me for a minute because 1) Nobody told me the name of your blog was supposed to mean anything, and 2) I was in the car with Veruca Salt, 15, who insisted on turning up the radio in the middle of my telephone interview because the latest One Direction song was playing and it had been almost 10 minutes since the last time she'd heard it, and 3) I always assumed that anyone who came here would figure it out. And then explain it to me. 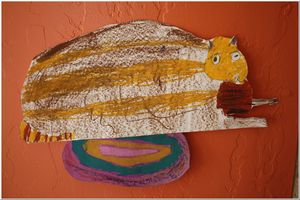 I'm working on a better story for the next person who asks because if blogging has taught me anything - and I am not saying that it has - it's that you had better be prepared for your 5.3 seconds of fame-ishness, because there is really no second chance to get it right when the Daily Planet is on the phone.

The trick is to condense your story into a "sound bite" - which is journalism slang for "Seven to 12 easy-to-spell words, at least two of which should reference a celebrity, or a cat."

The long version: When I first moved "here" from This is Living, I felt like an alien. I was so much cooler than the other women I met, which scared me a little because in other parts of the world I was never more than like the third or fourth coolest person. When I showed up at their get-togethers, I'd be the only woman in the whole place wearing a bikini, or drinking a Margarita. And then one day it dawned on me: It was 15 degrees. Also, I was at a PTA meeting.

Eventually, I learned to adjust to the rhythms of my new life in the so-called "Midwest." And by "adjust" I mean, "complain loudly about how much I hated it here." It didn't help that everyone I met told me I was going to hate it here. And that I was crazy for moving to Chicago from a place where they imagine everyone sits around the pool all day drinking mojitos under the palm trees, while handsome men in Disney costumes feed them guacamole and cocktail shrimp.

I lived in South Florida for 15 years and that sort of thing probably happened less than twice a week.

But the point is, when you spend all your time complaining to everyone you meet about how cold you are and how hard it is to find a decent mojito in the suburbs, eventually, you will run out of people to complain to. (Also, in one of the truly charming quirks of the Midwest, people will start planting mojitos in their backyard gardens just for you.)

The Internet provides a practically unlimited audience of people you can complain to. So, I started a blog. I named it Suburban Kamikaze because I didn't have the business savvy to call it Justin Bieber's Cat.

Posted at 07:44 AM in Ask the Suburban Kamikaze | Permalink

Ha!! Very funny! Love the blog title you considered! Maybe you can have an offshoot called JustinBieber'sCatStartsTwitterFeudWithKanyeWest'sRottweiler. I'd read that too!

And if I'd had any sense that I wouldn't want to be "mommy" as a writer forever -- or that my blog could be anything but a way to feel not completely lonely in the winter in the midwest with two tiny children and no friends who had any children -- I would have named mine "Justin Beiber's Cat" too. Or at least something a little less pigeon-holing. LIke, perhaps, "Kate Middleton's Cat."

I'm pretty sure Kate Middleton's cat could kick Justin Bieber cat ass. And I can't even imagine what sort of SEO carnage you could sow with a Kanye West rottweiler. I will have to check with the girl. She is always current on stuff like that.

Very, very funny. I always just assumed it meant you were not expecting to survive the mission--i.e. move to the burbs in the midwest--but as dedicated mom and spouse you were willing to sacrifice yourself--albeit with a lot of complaining.

BTW who were the first, second, and third coolest in South FL?

That sounds like a math question. I think you know my position on math.

If Bieber named his cat Mojito you would have synchronicity. And you could kick everyone's ass.

Is it too late to convince you this has always been a celebrity cat blog?

I FEEL YOUR PAIN. I can't wait to get out of the suburbs.