« 99 Reasons to Drink in the Suburbs #29:There is still some wine left | Main | Still life in paper and delusions »

The NBD guide to sending your kid off to college

The day I say goodbye to my son is pretty much like every other day in Southern California - warm, sunny and canopied under a sky so blue that I suspect it has been photoshopped.

But it is real. Days like this are no big deal in Southern California. They come one after another whether you notice them or not. The university has set out a pancake breakfast on the quad across from the fountain by the library.

There are fountains and libraries everywhere here, arranged between the palm trees and the plazas dotted with umbrella-topped cafe tables. It could be the University of Tuscany except there is no wine.

Freshmen and their parents are eating and posing for pictures under the photoshop sky. It's the day after move-in and the students have just spent their first night in the dorms.

For about half of the students here, moving meant packing up rooms from somewhere in the Los Angeles area or perhaps a few hours north, so while the sense of transition is real, many of the goodbyes are really no big deal, geographically speaking.

I see a couple of Boy Esq.'s new roommates with their parents, but there is no sign of the boy. It's no big deal. We're not really big breakfast eaters in our family.

I send him a text telling him where I am and watch from the back until the waiters move in, the breakfast is cleared and the Class of 2017 starts to put on their long black robes for the procession to another part of the campus where they will be welcomed into the university with music and speeches and a foreshadowing of the same fanfare that will mark their graduation a few short years from now.

I find a good spot on the stairs next to the sidewalk the procession will follow and I take the lens cap off my camera. I hope I can keep my mascara on, but it's kind of a heart-swelling moment when you see those kids in their long black robes marching behind the banner of the engineering school. I think: One of those kids is mine.

I am almost afraid to try to pick him out of the line, knowing that I'm going to see the face of the little engineer sitting on the floor of his room surrounded by his Legos, deep in concentration as he sifts through a million little pieces of plastic to find exactly what he's looking for. But of course, that little boy is not here.

I know this because he texts me.

ME: Where?? You r supposed to be here in your robe.

BOY: Across campus. I'm not gonna run. It's NBD.

ME: Am I supposed to photoshop you in ??

BOY: To what? Like 50 percent of the kids show up to that thing. I kind of slept in.

ME: OMG. I am going to find a kid who looks like you and adopt him on the spot.

BOY: I will be there at graduation.

I stay for most of the ceremony anyway. There are inspirational speeches, music from the famous marching band and a chamber orchestra. There is useful advice to the incoming class, stuff like Never do your laundry on a Sunday. Everyone tries to do their laundry on a Sunday.

I make a mental note to pass this along to the boy. Only now I'm a little pissed. "Always do your laundry on Sunday," I will tell him.

There are a still a few hours before I have to say goodbye. It's NBD, really. And I manage to keep it together.

Until I get the call from the financial aid officer. Funny story: It turns out that our loan money never came in because one of the boy's parents, who I am not going to identify here, but who is not me, filled in the wrong birthday on the application.

Just call the government office at this number and get it corrected, the woman from financial aid tells me. It's no big deal.

I want to believe her. But I've never heard the words "government office," "correction" and "no big deal" in the same sentence before. Also, I'm on my cell phone in the middle of the campus where all of the other parents are swelling up with pride watching as their children, whose birthdays they probably know by heart, just officially became college students.

It turns out that I am right to be skeptical because the way you "correct" a mistake on your financial aid forms is that you actually start over. Which sounds like kind of a big deal. It also turns out, that it was, in fact, a mistake to wear mascara today.

The orchestra is playing in the background, my phone is pressed up against my ear and I'm desperately scanning for a spot where I won't be noticed as I start to sob into the telephone with the federal student loan department where my conversation is being recorded "for quality assurance" and probably for the training seminars where it will be played a million times over the next 30 years as an example of the emotionally-disordered parents they have to deal with.

It's no big deal. It's not like I'm the only parent out here losing the fight against tears. Only instead of crying at the thought of having to say goodbye to my firstborn child in a few hours, I'm picturing having to bring him back to Chicago with me because his parents couldn't be trusted to get his birthday right.

Luckily, the man who was there all those years ago on the day the boy was born - which at this point would be kind of petty to point out was actually two entire days before the date he wrote on the financial aid application - is a cool-headed, crisis management kind of guy.

I'll fix this, he assures me. And he does. It's really no big deal. 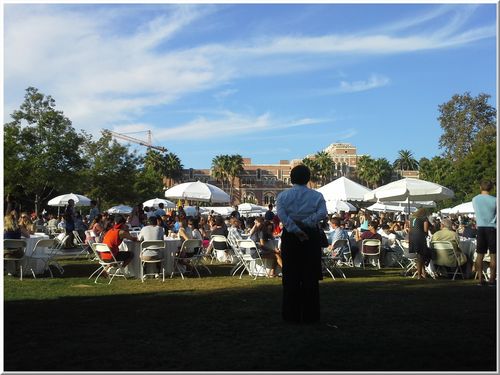 Photo: Breakfast on the University of All Our Money campus, where  I believe my son may be a student.

All that on top of leaving him there?! VBD.

I bet it sure is handy to be a "cool headed, crisis management kind of guy" when you are, in fact, the CAUSE of the crisis. Of course, he would just say I would know that from personal experience. (Because putting the wrong birthday on your child's very important school-type documentation that follows them their whole school lives and eventually screws up all the scholarship apps is really, you know what? I don't want to talk about it...)

You are the reason I had to let him off the hook. So yeah. Thanks for that. Well, that and the fact that I clicked on the wrong year the first time I attempted to fill out the FAFSA.