« California Diary Day 1: Some of us are more totally stoked than others | Main | The children will have to respect me now »

We have been in L.A. less than 24 hours and Boy, Esq. has already suggested ways in which my packing, driving, navigation and parenting skills are in need of improvement.

Within the next few hours, he will have added a critique of my sleeping, eating and grooming practices.

His assessment of my parenting skills begins with a definition of “breakfast” - the takeaway being that this is a meal "other mothers" regularly prepare for their teenage sons.

But it’s not all teenage recrimination. We are here at the University of All Our Money for a two-day orientation in which various university officials also get their turn to suggest ways in which I am expected to fuck things up.

Though it is more subtle, and couched in the careful language of "Of Course, We Don’t Mean You," there is no mistaking the underlying theme: Time to Let Go, You Crazy, Hovering Helicopter Parents. But don't be late with your tuition payment.

It is pretty much the same speech I got from the Montessori people when I tried to carry his backpack for him on the first day of preschool, circa 1998.

Only this time it is costing me about $30,000 a year, not including hotel breakfast and airfare.

“Do you want to know which one you are?” the boy asks me during one session.

"Which one what?” I say. I have lost the thread of conversation from the front of the auditorium, where various university officials are once again hinting to us that parents are both absolutely critical and completely superfluous to their mission of transforming 18-year-olds into productive members of society in just four years.

Something has been said about parenting "styles," so it’s safe to assume that even if there is not a specific category for the Non-Breakfast-Making kind, whichever classification Boy Esq has assigned me to, it falls into the general category of Disappointing.

I'm okay with that. My own parents were disappointing. But by the time we get to the session in which parents are expected to share their sadness about separating from their child, I have no use for the box of Kleenex being passed around.

Our soon-to-be-college students, we are told, might be a little hard to live with this summer. It's part of the process of "detachment" by which they need to push away in preparation for life without us. It manifests itself in abrasive behavior, rudeness or possibly snapping at objects in a hotel room with a rolled-up wet towel until they are scattered everywhere and one of us has to go around on her hands and knees looking under the furniture to make sure something important is not left behind. Is that my good pen? OMG, will this trip ever be over?

And of course, it is over way too soon. 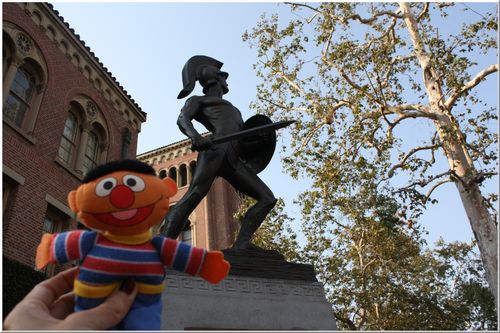 Photos: SK, "Tommy Trojan" and Little Ernie, a childhood favorite of Boy, Esq., on campus at the University of Southern California, where parents can be divided into "those who carry childhood attachment objects in their luggage for college orientation, and those who don't."

You had sessions together? When we went they disbursed well trained university herd cutters with bottomless Starbucks coffee urns to separate the veal from cash cows----we saw our kid once in three days while enduring the same psychotic sermons. But the husband did manage to down double the food it would take to reimburse us for the participation fees so as of this minute, it is still parents 1 college 0 in our house. I expect that ratio to change...

They had us together for a few events, separated us for others. The key, I believe, was keeping us well-fed, but constantly moving and slightly disoriented, so that when it came time for us to learn the fight song and the secret handshakes, we complied without resistance.

I believe at one point I may have made a video denouncing The University Across Town That Must Not Be Named, but it is all so hazy. The Trojans are my family now.

All I know is that it is damned shame there are no colleges or universities in Illinois, so that all of this might have taken place closer to home.

You underestimate the reach of the Trojan "community." There are, we were informed, activities planned for us here in Illinois and I am pretty sure a few members of the marching band followed us home as part of the school's strict cheer enforcement policies. I am not going to use the word "cult", because that would probably get me in trouble with the cult leaders.