A week ago, she had never even been behind the wheel.

Now she is hurtling across the state at upwards of 65 mph, oversize sunglasses propped on her head, long blonde hair framing her face, intent on the road. Also, the scenery, the passing cars, the experience.

She looks like Malibu Barbie. Except this is a real car. Not that anyone else seems to have noticed. 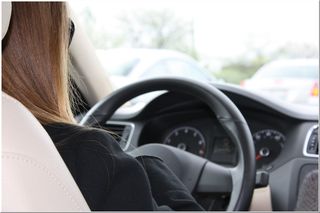 This is our fearless child, the one who says yes to everything, sometimes before she has heard the end of whatever is being proposed.

I would have said no, but nobody asked me.

There is no way she is ready to drive across the state. I only just started teaching her to drive in the parking lot at the mall. At speeds of up to four miles an hour.

This trip is a conspiracy between the girl and her father, who dismissed my objections in a single sentence: She's not going to learn to drive in a parking lot. Which made a lot more sense in the house.

From the back seat of the car, where her brother and I will be hostages for the next three hours, some pretty good counterarguments have begun to occur to me.

But the girl has been counting down the hours to this trip ever since Mr. Kamikaze told her she could drive. We're driving to her cousin's wedding on the other side of the state. It's like prom and her birthday rolled into one.

She has made a playlist for the occasion.

"I don't think she should be listening to music," I say. Her father looks at me patiently from the co-pilot's seat. "Why don't you just take a little nap?" he says. Then he adds, "that's what I'm going to do." He flashes Veruca the first of many looks meant to convey that I am to be ignored.

That is when I know I am the only one who recognizes that we are all about to die.

Veruca has anticipated my musical objections. Her road warrior playlist opens with Amanda Palmer. Now I'm on board with the music, just as she knew I would be. She flashes me a victory smile in the rearview mirror.

The boy is harassing her from the back seat: Veruca, do you know what those lines on the road are for? I do not look up. I can't believe anyone thought this was a good idea.

Somewhere between his second and third doughnut, the boy's thoughts turn to food. "Is there going to be food there?" he asks. Veruca rolls her eyes. She can't believe what a peasant her brother is.

"It's a wedding," she says. "Haven't you ever been to a wedding?" She spends the next 20 miles or so schooling him in wedding conventions.  As if we're actually going to get there.

She comments on the scenery now going by at 80 mph; her brother comments on how stupid her observations are. Is there even such a thing as a lightning pole? It's what passes for conversation in our car, except now I'm in no position to issue the usual threats. My job is to sit here and pretend we're not hurtling down the interstate at the hands of a girl who writes on herself with Sharpies and believes she is going to marry one of the members of One Direction.

She's looking in the wrong direction, checking out the driver behind us in the rearview mirror. "There's a guy behind us in a suit," she reports. I turn up the volume on my iPod so I can't hear her not watching the road in front of her. She continues to bicker with her brother.

"Stop talking to her," I hiss. "She needs to concentrate."

I can't concentrate. I've been looking at the same page of the newspaper for 75 miles. If we survive this trip, we've got global warming and crippling student debt to look forward to. Also, a new play. None of which matters now, does it?  But I am the only one who knows this.

Posted at 05:07 PM in Girl Kamikaze, Teenagers , What Passes for Parenting | Permalink

Stop! You are making me spit coffee at my iPad, again!

Oh sure, it seems funny now that the car is in the driveway.

My son has been driving for about two years now and I'm still convinced I am going to die when he is driving.

Maybe you should try my mother's approach from when I was a new driver, and whenever you notice something alarming just scream in terror. It startled the crap out of me every time my mother did it, and I thought it would cause a crash for sure. We both survived, however, so it's a field-proven technique.

Between that and the imaginary passenger-side braking system, I don't see how you could go wrong. Field tested, mother approved.