The stakes could not be any lower.

Which of the teenagers will ride in the front seat of the car for the duration of the commute to school, or in more specific terms, approximately five minutes? 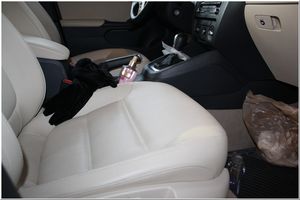 The boy clearly believes he has claimed it by tossing his backpack onto the seat. To any outside observer, this looks as natural as a boy putting a backpack onto a front seat. But to his sister, Veruca the Undefeated, this is the unmistakable sign of the throwdown.

She can't ignore it. Because she cares too little about where she sits, while her brother cares way too much. It is a mistake to telegraph weakness to the girl. She is tenacious at this sort of thing. The lower the stakes, the harder she plays.

Logistics are in her favor. There is another car parked behind and the boy has to back it out of the driveway before the car where Veruca sits in the front seat can get out. It doesn't really matter where his backpack is now. The boy himself is outside the car, whereas Veruca is inside.

She moves his backpack to the backseat and slides into the front seat as casually as if she were just getting into a car. She may even be whistling.

The boy watches intently from behind the car. His body language suggests he has anticipated this. Perhaps he put the backpack there only to strengthen the case he knew from the outset he would have to make. The girl keeps her gaze forward-facing and innocent.

Only the mother is still clueless, sitting behind the wheel of her new car, which does not yet smell like teenage boys and fast food and in which the only sound is the sound of the music. Her music! She put the CD in herself and no one has taken it out yet! It is practically a dream come true now that her dreams have been reduced to this. She wonders vaguely why it is taking so long to get out of the driveway.

The boy does not move from behind the car. He stands with his arms crossed, looking forward in a gesture of unmistakable intent: No one is going anywhere until Veruca moves into the backseat. A standoff. At 7-fucking-30 a.m.

The mother has just realized her predicament. As the more reasonable of the two children, and the only one within the sound of her voice, it is Veruca to whom she must appeal. It is weak, but it is 7:30 a.m. and the mother has not yet had her coffee and it is very cold.

"Veruca," she says. "It is 7:30 a.m. and I have not yet had my coffee and it is very cold. Your brother is playing this one to the death. Just move into the back."

"I can't," says Veruca. "It's a battle of wills now." And she laughs because she knows you cannot really lose in a battle of wills over something that doesn't matter to you.  It's a win for Veruca no matter how it ends.

It's really a throwdown between the boy and the mother, who is uncaffeinated. And also cold. She can't win under these conditions. She can only lose faster.

She appeals to Veruca's sense of cruelty. It is the only play she has.

"Veruca," she says. "Back seat. Now. You can mock him on the way to school." Veruca agrees. She will provoke the boy into arguing for the seat the entire time he is sitting in it.

This is how she became known in our family as the agreeable one.

The thing that jumps out at me in this story is---the white seats? You bought a car with white seats? Seriously?

This is brilliant. And yay for a new car! Also, what they both said up there. White seats? (perhaps this are comments coming from people with younger children? All I know is my children + white seats = brown seats in about 4.4 seconds)

And then there is me - not so worried about the white seats; instead saying, "And THIS is the reason I only had one."

Congrats on the new car (white seats and all).

The seats are not as white as they appear in this photo. They are closer to the color of french fries, because Chipotle was not an option.

Your family is in a whole different psychological weight class...and, 7:30 is night-time. Kudos for surviving.

Oh, Suburban Sheepdog--I'm sorry. I yield the comment on white seats to you. Instead I will say---why is Boy Esquire not driving? SK, you should be lounging in the luxurious french-fry colored back seat with a bluetooth phone selecting the proper mood music for enjoying the Starbucks of your choice and the New York Times. Really, must I come up there?

Yes you must. And I am holding the two of you responsible for the fact that NOT 24 HOURS AFTER YOU MADE AN ISSUE OF THE SEAT COLOR, I was scrubbing blood from one of them.

I didn't even want that stupid comment anyway, so who cares?

okay - I'm so lucky my kids can't argue over the front seat yet! It is bad enough trying to get them to get along in the back seat! If I keep my purse in the front passenger seat, does that mean that I get both seats to myself forever and ever??

It seems reasonable to me, but sadly the answer is no. You will be lucky to keep your purse to yourself. You may be living the tiara-topped dream now, but those adorable little children in the backseat? They are already plotting your overthrow.

Did you say BLOOD? On the seats? I don't want to say I told you so---I will let Suburban Sheepdog do that---