Never bring an olive to a food fight.
Unless it's a really good olive.

People are always asking me, "Suburban, is it true that you once threw a box of strawberry-flavored Cheerios at your son in the grocery store?" 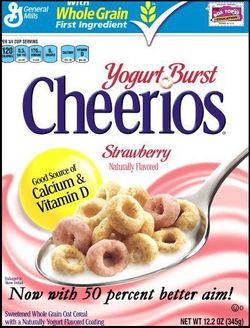 That's not true: nobody has ever actually asked me that.

So I have no reason to confirm or deny any rumors surrounding the alleged incident. Except to say, hypothethically, there would have to have been a great deal of provocation behind such an act and 2. it's not possible to actually injure someone with a box of strawberry-flavored Cheerios.

It's not just that the Midwestern grocery store experience is hellish in itself - crappy selection, a generous interpretation of "fresh" and cashiers who believe every transaction is a conversation starter - it's that the members of my family have managed to destroy any enthusiasm I ever had for the process of feeding them. I can hardly believe I am the same person who once bought cookbooks with titles like 100 Foods Your Kids Will Love.

Now I just try to get to the cash register without killing myself, or starting a food fight on aisle 3.

Their taste in food is terrible and expensive. They never stop complaining about their meal choices and they have zero appreciation for the effort. Or recipes from the New York Times dining section. In short, they do not deserve to be fed.

And yet, there I am week after week, trying to get to the end of a horror-novel of a grocery list and get out before anyone can try to start a conversation or force feed me a sample of ham.

My cart is piled with Teen Cuisine: Pop-Tarts, Cheerios, Goldfish crackers, salsa in the jar and low-quality sandwich bread - what they refer to as "real bread." Only the Greek olives stand between me and complete surrender.

There is no point in making any more of a stand than that in a world in which it is actually possible to subscribe to Pop-Tarts.

Related recipes: Nothing. It's what's for dinner

Top Ten dinner ideas your teen will love. Not.

All that - coupled with the fact that I can't cook - is why I DON'T cook. Oh sure, I'll throw together a dessert every once in a while because at least that is APPRECIATED. But cook? No. Shop for food that isn't wine? No.

I drew that line in the sand early on and I am standing by it.

It's official: the kitchen is closed.

I think your birthday gift just morphed into the Pop Tart of the month club.

Don't make me come down there and drink all your wine. I know where you keep the good stuff.

Costco makes me break out in hives. It's just Too. Much. Cereal. Can't breathe.

Oh, you poor thing! There is one cashier here who feels the need to chit chat and comment on all of your food purchases and my friends and I avoid her line like the plague. I would sooner self-checkout 90 items than get stuck in her line. The thought of every cashier in EVERY store being overly chatty and familiar strikes fear in my cold Yankee heart.

My favorite is the one who always asks me about "my boys" as if we know each other. I have no idea who she is talking about but I always answer 'fine.'

Wow, say hello to Joan Crawford for me next time you see her.

My Mommy Dearest once threw a box of macaroni and cheese at me. TO THIS DAY! I have been mac & cheese shy – and somewhat disoriented.

If Joan Crawford were alive today she'd be the author of a bestselling parenting manual.

My daughter is 27 and I still have to have spaghettios in the house when she comes to visit.
At least you don't have the guilt associated with being a hippie mom whose kids now eat spaghettios because you gave up when they hit middle school.
She still likes my tofu chili, though, so there's that.

I wanted to be a hippie mom for a while. But there was too much bread baking.