« More reasons to love the English | Main | I am one thumbtack away from having it all. »

Hanging out with my 4,500 new best friends

I returned from BlogHer12 in New York City with a giant stack of business cards and a suitcase full of sex toys, which thankfully, did not spill out all over the baggage carousel in Chicago, where, according to a survey commissioned by the sex toy maker, the people are among the country's "most adventurous."

I'm not sure what that means, but it is a very long winter.

But what really had me buzzing was the amazing collection of people I met over the weekend, in between hanging out, okay, drinking, with some of my already-favorite people. If there is anything more entertaining than spilling $20 Margaritas with the Internet's funniest blogger, I don't know what it could be. And anyway, it is still in the box.

I finally got to meet one of my longtime favorite bloggers who was nice enough to run toward me squealing like a fangirl every time we passed in a corridor, misleading other women into thinking I must be already famous. I was thisclose to being asked to sign someone's breast.

Speaking of already, I had a great time at the copyediting lab where I had the honor of passing along a few things I've learned. Among my key pieces of advice: Get rid of words like already.

"Hypocrite," however, is a perfectly fine word.

I was thrilled to have had their attention, particularly since the BlogHer people set me up for failure by putting me next to the funny and talented AV Flox who was not there to talk about punctuation. 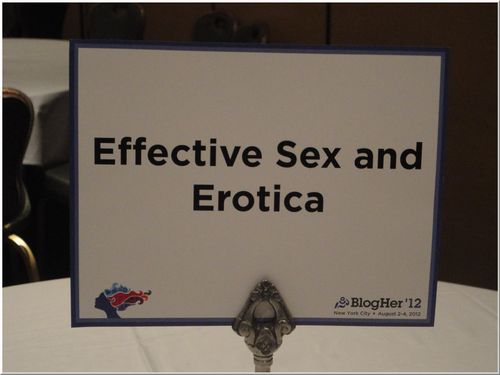 Then again, she also didn't give out red pencils, so I'm pretty sure the thrills evened out. 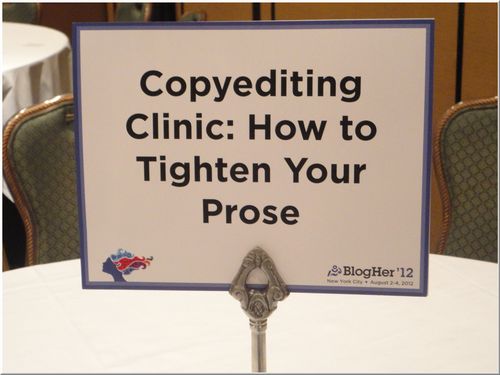 Is there anything as sexy as a crisply edited sentence and a free red pencil?

Don't answer that. It's a rhetorical question.

P.S. Be sure to check out the sidebar for a list of people I collected at BlogHer12. If you're not there, it's probably due to:

a) Margarita-induced memory loss. Remind me again what we did?

b) I lost your business card among all the sex toys. Contact me.

from the archives: Never challenge a drinking major to an English contest and other things I learned at BlogHer 09

Posted at 04:03 PM in Ask the Suburban Kamikaze | Permalink

Funny--in grad school they made us edit with green pencils. Green means "go" and red meant "bloodshed"
I always kind of considered that the whole point!
Great post, and thx for the mention!

Green does seem kinder, doesn't it? Then again, copyediting is an art that comes with advice like "kill your darlings" so maybe bloodshed is a little more to the point.

It was great meeting you.

Someday I'd love to go to Bloghuu, But, I know better. Half the womenz would love me at first sight. The other half would tell them why that would not be a good idea. What side are you on, the love me or the not so much? Really.

And be thankful I'm not a "totally" kind of person. I mean "really". B/c to say "totally really" side-be-each is about as smooth as 80 grit sandpaper.

You really couldn't miss. Half the women would be about 2,000 women. I would be on the side nearest the wine bar, silly.

It was fun to meet you at the Pathfinder writer day! I look forward to reading your posts!

- are the funniest ever. On her shock at discovering that connecting flights can be canceled: "That's like a thing."

Love my red pencil and loved my copyediting class. Just about to write to the whole group. Thanks again for giving me some great insight in my writing!!

If only Zen parenting were as easy as tightening your prose...

It was great to meet you,

I looked for you amongst the 5000 people crowding the damn halls. But I must have missed Mr. Lady's squealing. Mostly whenever she sees me she flips me the bird. Totally weird, right?

But, you were on my list to meet. So now I will just keep cyberstalking you until our paths cross.

Chicago, baby. It's practically in my backyard. We can't miss.

I had hoped to get pulled aside from TSA for the 6 vibrators from Trojan and 1 from Eden Fantasys. (Yes, I do tend to go overboard on everything, it's that type A in me.) But alas I got to go through Precheck. I had an entire blog post created in my head to go with the story, but will now to have come up with another one. Of course, the post will have to wait until my inlaws leave for vacation. Trying to explain to my MIL why I came home with 7 vibrators is not a conversation I want to have.

You really are an overachiever.

I think we could do some red pencil copy editing for next year's workshop. We could change that sign to "tighten your pose"; this would allow for all sorts of erotica inspired copy mistake/examples. I don't know what tightenening one's pose would mean, but it sounds dirty doesn't it?