At least in theory. My sisters-in-law are relentless in their campaign to unseat me from my position as First Daughter.  It doesn't help that my mother will let pretty much anyone into the family and refuses to acknowledge an official pecking order.

We are forced to plot against each other like characters in a Shakespearean drama. Or possibly an episode of The Brady Bunch. Except with more swearing and a lot of rum drinks. It's really more of a pirate story, now that I think about it.  Picture a family reunion set on Treasure Island. What's weird is that we actually are in Treasure Island.

My point is, the alliances are constantly shifting depending on who is in favor. Also, I am really more of a wine drinker and my baby sister-in-law prefers beer in a can because that is just how she was raised. Also, I do not think she actually keeps any glasses in her house.  But we are not here to criticize my sister-in-law's taste in beverages. We are here to criticize my other sister-in-law's overachieving performance as family vacation planner.  And by "criticize" I actually mean "lead a round of applause."

She racked up something like a million points with my mom just because she did all the shopping, cleaning and organizing for the family reunion.  Also she didn't make any lewd gestures during the family pictures. Not one. She is going to be really hard to beat this year.  So she is going to be looking over her shoulder for a while.

Which is just paranoid really. 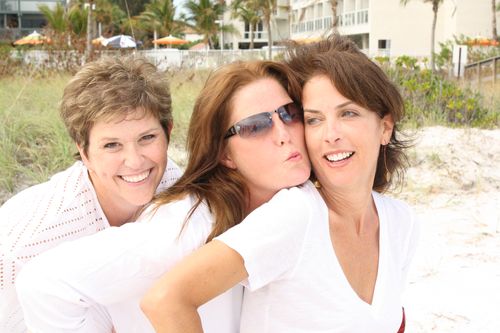 Photo: Keep your brothers close, but keep your sisters-in-law closer.

from the sister-in-law archives: There are no brunettes in Dallas

Posted at 10:21 AM in Ask the Suburban Kamikaze, Postcards | Permalink