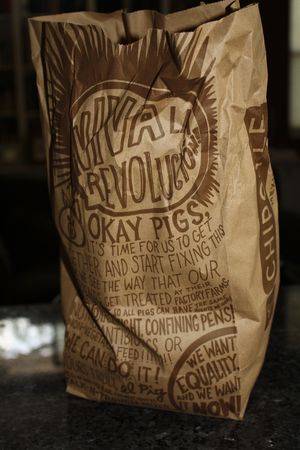 Teams of scientists and literally trillions of colliding subatomic particles have produced compelling new evidence of the mysterious force that could hold answers to the most profound questions in the universe.

But we are no closer to solving the mystery of who left the Chipotle trash on the kitchen counter.

Much like the disappearance of every single clean towel in the house, the fast-food trash phenomena left the four teens with whom we are sharing vacation accommodations completely baffled.

How did it get there? What unseen forces were responsible for the fact that the Chipotle bag appeared on a kitchen counter that previously had not contained a Chipotle bag? Was it only coincidence that the teenagers had brought back Chipotle burritos a short time before?

The only certainty was their shared conviction that someone else was responsible for the bag's sudden appearance in the universe.

The 15-year-old who had ordered the steak and rice burrito summed up the puzzling situation in starkly literal terms.

Her brother, 17, offered an alternative theory which placed his sister and her 14-year-old BFF at the center of responsibility, but was hazy about the link between the bag and his decision to "make a burrito run" earlier in the day.

Further insights were postponed by the unrelated discovery that the teenagers were hungry again.

Related research: How to feed 4 teenagers for 2 weeks for under $1 million

Posted at 07:36 AM in Dateline: Suburbia | Permalink

Only one possibility: Schroedinger absolutely left it there.

But I can't be sure.

I don't need the God particle to answer this question: which law of relativity made the bag finally go away? The relative on the maternal side, that's who.

Not exactly the elegant universe around here...

I don't know "from" where the bag came. We might need a check-up for adolescent prepositional dyslexia, which is very curable and does not require braces. And while there, I would LOVE to see "a burrito run". I once thought I saw a taco fly. Tequila does that to me.

P.S. Since we are being literal, tell me you didn't literally name your children numbers. Your son's name isn't really 17 is it? I know, I loved to watch Get Smart too. :)

I did not name that particular 17-year-old anything since technically he belongs to one of my BFF posse members. We have about a dozen teenagers between us and they really don't answer to anything. On the other hand, we all answer to "Mom."