« Awkward teenage mating rituals: there's an app for that | Main | Does everybody remember their safe word? »

"Just think of something and then buy it for us." And other inspired Father's Day ideas from teenagers...

If there is anything that gets teenagers more excited than a holiday to celebrate the Contributions of Parents, I can't think what it could be.

Other than Pop Tarts, I mean, but that shouldn't count because that is more of a chemical reaction than genuine excitement. Not even Substitute Teacher Appreciation Day could go up against Pop Tarts in a competition for a teenager's enthusiasm, so it really doesn't even bear mentioning.

My point is, other than toaster pastries, there is nothing teenagers look forward to as much as the annual opportunity to demonstrate gratitude to the people whose entire life  is devoted to their upbringing and happiness. Not counting money, vampire television, fast food or being home alone.

And here, just for accuracy's sake, I am going to mention the "moab" - which is something you earn for bringing off 24 consecutive kills in the video warfare exercise known as Call of Duty. I don't know what a moab is, but it could be some sort of gift for his father. Otherwise, it's true that Boy, Esq. 17, is slightly more engaged in accomplishing this than in making plans for tomorrow's big tribute.

But things are said and done in the heat of a virtual battle that do not necessarily signify their place in the hierarchy of priorities. So Call of Duty is probably no more relevant to this discussion than a box of strawberry frosted Pop Tarts filled with cash.

It's also true that Veruca Salt, 14, will be asleep most of the day, recovering from a sleepover/overnight texting session, but that doesn't mean she is not bursting with ideas as to how to celebrate the man whose 70-hour a week efforts mean we can almost afford her iTunes habit.

Trust me, if there is a single synapse firing anywhere in her consciousness that is not carrying critical data as to whether the boys in One Direction prefer vegetarians or blondes, she is almost certainly dreaming up the biggest Father's Day celebration since ever.

In fact, the more I think about it, nothing could be more unnecessary than reminding these bursting-with-appreciation teenagers that tomorrow is Father's Day. It would be like reminding them that there are strawberry frosted Pop Tarts in the pantry.

Still, just to be safe, I will give the boy a heads up. "There are strawberry frosted Pop Tarts in the pantry," I say. "And tomorrow is Father's Day. I'm pretty sure."

Turns out he already has a plan: "Just think of something and then buy it for us," he says. Also, we are out of Pop Tarts.

It is the same tone of voice you might use to say "the directions are on the box" to someone who has just asked you how to make a cake.

Not that there will be cake. 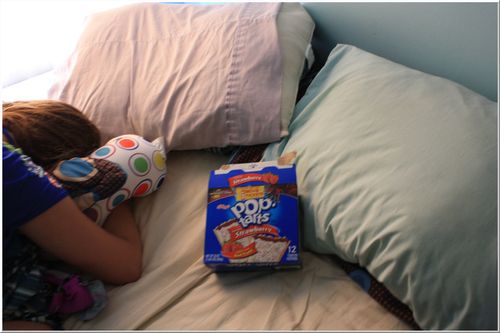 from the archives of really lame tributes: Happy Father's Day, unless it was yesterday...

Posted at 01:11 PM in Holiday Traditions I Just Made Up, Teenagers | Permalink