« "P" we know is Porter | Main | This just in from the middle school fashion desk: »

The teenagers are manning the barricades in our house this week. Can you blame them? So much is wrong in the world. Let's just start with the snack situation and go from there:

1. There are never enough snacks in the house. And let's be clear about this: "Salad is not a a snack." Ditto for olives.

2. There is Too Much Singing: The 14-year old must be made to stop singing. It is driving her brother crazy.

3. No one should have to stop singing. He can just go to another room.

5. Shipping and handling should not count as part of an Internet shopping spending limit.

6. We are tired of being blamed for things we don't admit doing.

7. There are never enough clean towels. Even counting the ones from the guest bathroom.

8. We should be allowed to use the towels in the guest bathroom.

9. Stop blaming us for taking towels from the guest bathroom. We have no idea how they ended up on the floor of our rooms.

10. We are sick and tired of all of the rules we don't even follow. 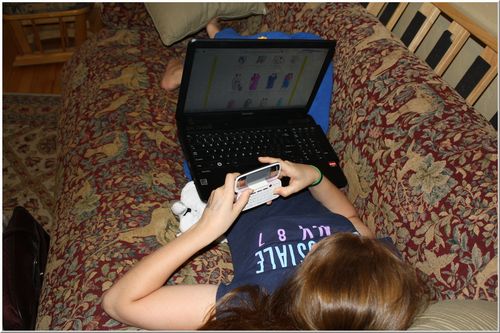 Photo: A spokeswoman for the group plots her next super-cute dress purchase and chafes under unreasonable spending limits. "Can you just let me live for once?"

in related news: A critique of household rules by its teenage members

Pat,
You never fail to make me laugh. Thanks.

You know, we were warned that teenagers could eat you out of house and home AND drive you completely crazy at the same time.....but we really didn't believe that those sweet little babies we held would do that to us, did we?

Now it's up to us to warn those with little ones and, somehow, make them believe us.

No one is ever going to believe that singing has brought us to the brink of war.

I can hardly believe it myself and I am trapped on the front lines.

The dishes left out, towels on floor, piles of clothes on floor, is mind-boggling. Today she walked right past mail on the floor and did not see why she was responsible for picking up. Husband is really no better. Finally, because he knew I was pissed, he "helped" me by unloading the clean dishwasher--the daughter's chore. Gee, thanks for making our daughter's life easier.

But they're so cute when they're sleeping. Husbands, I mean.