I don't know what kind of teenagers you are familiar with, but the 14-17 year-olds who live in my house would need a really long nap before they could even begin to contemplate taking on a task like making a list.

"OMG!" they would say. "How are we supposed to make a list when the paper is nowhere near the couch? Why don't you just ask us to go cut down a tree and make our own paper?  I guess Seasons One through 17 of the Vampire Diaries and/or South Park will just watch themselves?"

On and on it would go, until every last possible objection that could be made without rising from the couch or changing the channel had been exhausted.

So when the photographic dispatch below arrived via our Atlanta correspondent, we could not disguise our envy. 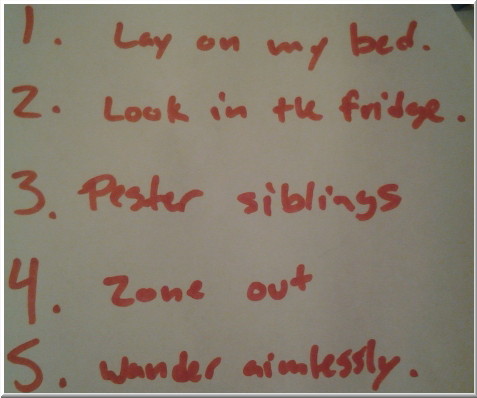 from the archives of teen ambition: Bonnie and Clyde, PTA members

Sounds like our high days. The only thing missing from the list is "live at the mall."

Kindly ignore the Freudian slip in the above post.

Have you considered stepping up on the beatings?

My teen had a full-time job at the Block Island Boat Basin last summer. He hated it. "I'm just not cut out for retail."
As if anyone is. Study boy, study. This summer, he is working at his school retooling the computers and sound system. Or least that's what he tells me. My money is on meth lab or cracking the nuclear launch codes.

It really is the greatest generation.

Is it too late to return them to the hospital where they were born? I don't need a receipt or nothin'.

I don't know. I feel like I am this close to figuring out where I went wrong. Then I will write a bestselling parenting book and retire in the Caribbean.