« Seriously lame: Mother of eighth grader learning vintage dance feels compelled to prove she can Do the Hustle | Main | Well-behaved women rarely get their skirts blown up, except in Chicago where it happens all the time »

Veruca Salt the Eighth Grader takes a little longer to get out of the car each day as I pull up outside the doors of Justin Bieber Junior High.

She takes her jacket off and throws it in the backseat before deciding, that no, she will wear it after all. She checks her eye makeup again in the mirror. She inspects the contents of her backpack.  She primps and stalls, partly in hopes that the line will move forward a little bit, saving her the extra five or six steps, but mostly because she has begun to think of it as a competition.

I make the mistake one morning of saying "Could you be any slower?"

You didn't have to be a mind reader to see the answer in her eyes.  She realized in that instant that she had only been going through the motions up to that point. She could be slower. She could turn in a performance that would bring time to a fucking standstill.

I'd be lying if I said I wasn't afraid. The girl does not take challenges lightly. And pointless challenges? They are her stock in trade. 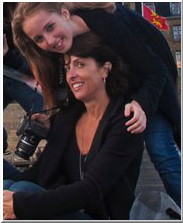 And so, to a long list of acting credits that include the starring role in the long-running family drama The Freakishly Self-Composed 14-Year-old Who Can Do Her Mother's Voice on the Telephone Well Enough to Trick Her Father,  she has added Morning Car Theater.

The outcome is a foregone conclusion. She's bringing her A-game. Her performance will run on a few minutes longer every day until she has broken me. She will make me beg. Please. Get. Out. Of. The. Car.

But I'm not going down without a fight. I will make every extra minute in the car a minute of teenager suffering.

I've got a few performances under my belt as the Mother With Way Too Many Lines. Today I open with the soliloquy from Every Awful Inspirational Speech Ever Delivered by a Parent in a Supporting Role:

Me: I know it's scary, Wildcat, but you've got to get out of this car, walk through those doors and seize the day! Make new friends, show them what you've got, go for it, just remember who you are. What's really important is what's inside, be yourself, be the very best you can be, and don't forget to follow your dreams. Your father and I are so very, very proud of you, no matter what happens. Win or lose. Even in the event of a tie. Did I say 'be yourself'? Because that's key. Also, please. Just. Get. Out. Of. The. Car.

And she does. But she's laughing. She knows she has already won.

Posted at 10:33 AM in Girl Kamikaze | Permalink

Yeah, but you’re smarter than her, right?

And remember, after she goes to college and then gets married three times, and then moves 3,000 miles away to a guy who has a permanent job there, and after your other kids move away (like to Louisiana), and after your husband divorces you and after your dog runs away, and there you are, old, living alone, rotting and smelly bad like Lazarus, leaning against the bathroom doorjamb and staring into the distant bathroom mirror at the image of a broken woman like some tragic painting by Goya and sagging skin looking like fried SPAM, and the only person who will visit you is your insurance agent wanting to sell you a Medicare Supplement and the only gift you get from your kids for Xmas is the renewal of your Senior Tech Wanderguard subscription and new batteries for all your medical alarm devices hanging around your neck, and after the email from Veruca that reads, “Hi Mom, we all went to dad’s for Thanksgiving and had a great time, probably will visit him for Xmas too, did you buy that Medicare supplement?”, and the senior center you moved to looked a lot better in the brochure since you had no idea it was really a park for refurbished FEMA trailers, and after the only thing that kept you going, that dog-eared photo of Audubon Ron can be seen no longer as the chemicals have finally faded, Get.Out.Of.The Car!

That's brutal. Drop all references to mirrors and expand on the classical art theme and you've got yourself a pretty good blast of teen-be-gone.

I am ashamed to admit that there is no such thing as public transportation for the distance we are talking about. I could probably see the roof of the school from the roof of my house.