"P" we know is Porter

So there I was, last Christmas, presenting Mr. Kamikaze with the usual pile of thoughtless socks and underwear, when in walks the Executive Suburbanite with only the most amazing and thoughtful gift in the entire world.

"Look," I said more than once over the holidays, "these are exactly the kind of socks you wanted." But I knew I'd been upstaged, even accounting for the years of Watergate-themed sex games.

So when I saw an opportunity to poach a little bit of the credit, I went for it. Bob Woodward was scheduled to speak in the Chicago area and I was determined to get him to sign Mr. Kamikaze's book.

It wasn't going to be easy. It was a standing-room only crowd and we only just managed to wedge ourselves in at the back. But I was not going to be denied my Christmas redemption. I left Mr. K in the back and made my way to the front of the room, inch by inch, over the course of two hours.

It is not true, however, that I crawled on my hands and knees or snaked my way through the air vents.

I caught up with the most famous journalist in America as he was leaving the stage. When I explained to him why it was his fault that I could not afford to send my kids to college, he graciously accepted responsibility for our finances and signed the book.

It was the least he could do. 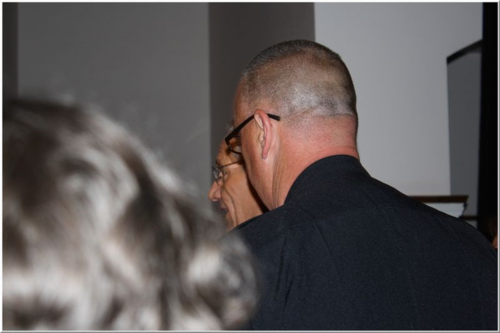 from the archives: Get out your notebook, there's more.

It's just too easy. And I am not going to go down for the easy joke.

Sexy librarian and the card catalog?

Nice try to recoup some Christmas points from me. But, nah.
As for cheap, easy jokes, you should have heard Mr. Executive. He had that covered. Several times, in many variations.