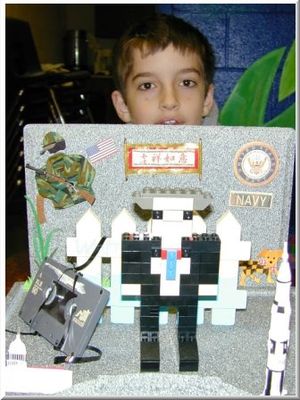 A strange look comes across the 17-year-old's face when I come up with an answer like "William Howard Taft" or the last line of The Great Gatsby.

It's the same look he gave me when I got stuck helping him with his algebra homework back in fifth or sixth grade - a span of time described in parenting terms as seems like yesterday.

One day he is wide-eyed with disbelief at the discovery that I don't know everything.

The next, he is open-mouthed at the revelation that I know anything at all.

Good god, I think, does he believe all these books scattered across the house are here for decoration?

But I don't say it. I remember how dumb my parents were when I was 17.

"So we beat on, boats against the current, borne back ceaselessly into the past."  - The Great Gatsby, by William Howard Taft.

Photo: Boy, Esq. with Lego Richard Nixon, who I believe succeeded William Howard Taft as president of the United States.

from the Boy, Esq. archives: Payback is a mother

Immortality no guarantee of a good hair day 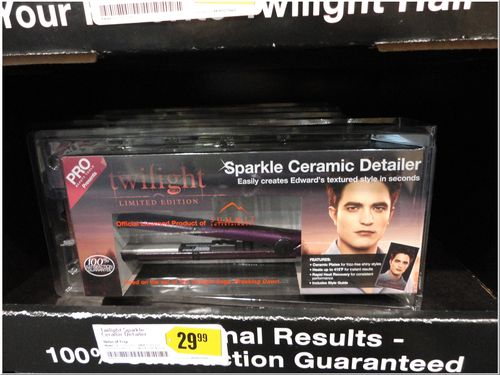 He may have lured the naive and insecure Anastasia into his playroom, but the handsome, rich and kinky CEO of Grey Enterprises Holdings Inc. had his share of strikeouts. His brand of don't-make-me-spank-you seduction has a surprisingly high rate of failure in the real world.

Some women, sadly, were more immune to his charms than others, as evidenced by some of the rejections contained in alternate versions of the e-mail and bondage saga Fifty Shades of Grey:

Fifty Shades in the C-Suite: Could we just cut to the chase Big Boy? I've already given myself three orgasms and fired two people while you were still explaining how your little room works. It's called S and M, Mr. Grey; the multitasking is implied.

Fifty Shades of Crayon on the Walls:  Only if you promise to tie the children up too.

Fifty Shades of So. Not. Happening:  You've spelled out the conditions under which we will have sex in a legal contract? That is so hot.

Twenty-Five for Me, Twenty-five for You:  Fine. But afterward we're going out for tapas and a chick flick.

Fifty Shades of Woman Over the Age of 25: I'm sorry, I'm just having a hard time seeing how this is better than me telling you what to do.

Buy Fifty Shades of Pink, a parody of submission

It was much ado about nothing, according to the boy. But of course, he would say that. He's the one who threw the penny, which may or may not have struck his sister in the eye.

At 14, the girl is a stage veteran who does not pass up an opportunity for ado, which included a tempest of tears and an impressive selection of 21st century oaths. In lieu of an apology, the boy offered his opinion that 1. The penny had struck nowhere near her eye. 2. He hadn't meant to hit her, and 3. it was all just theater anyway. 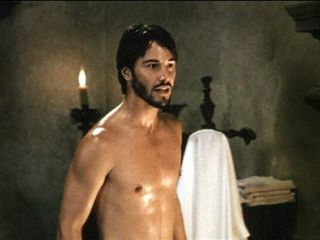 Even so, there was still the possibility that Shakespeare Night 2012 could be salvaged.

If Beatrice and Benedick could set aside their squabbling in the face of so much turmoil, surely we could get to the end of one Shakespearean comedy without another scene.

But you don't have to be a theater major to know what comes next. Because it's not truly Shakespearean until a second pair of combatants is drawn into the fray.

And so it went. My position was that 1. It was irrelevant where she was struck. 2. The boy's aim had produced four water polo goals from three times the distance an hour earlier, and 3. The girl was playing the scene for all it was worth, but that is what you get when you pick a fight with an actor.

I was for kicking the boy out of the room. He had zero interest in whether Benedick would renounce his commitment to lifelong bachelorhood or whether Keanu Reeves was going to take his shirt off again. The boy was there for no other reason than to try to foil our plans to find out. Which is why he was throwing coins in the first place. Duh.

Mr. Kamikaze was of the opinion that the girl's performance should go unrewarded even if that meant insisting that Boy, Esq. stay in the room watching a romantic farce in which he had already declared his complete lack of interest. This is what is known in parenting terms as "ruining the evening to make a point."

from the Shakespearean archives:

Verona of the Midwest 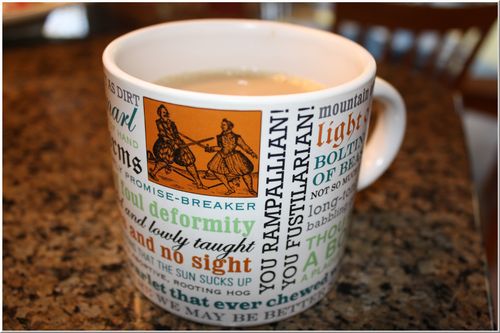 One household, where we lay our scene, marks Shakespeare's birthday with multilayered drama and colorful insults. Just like every other day.

Morning coffee brought to you by the Venice of America 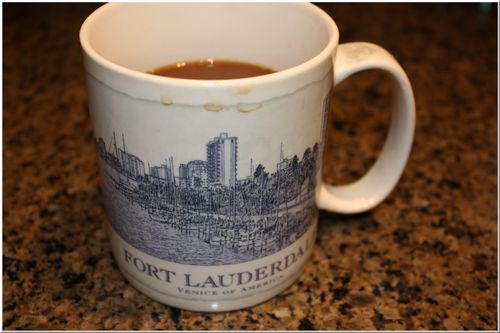 It's not even really the Venice of South Florida. But it's close enough.

from the coffee archives: How many 13-year-olds does it take to make a pot of coffee?

When life hands you lemons, take them. You can never have too many lemons. 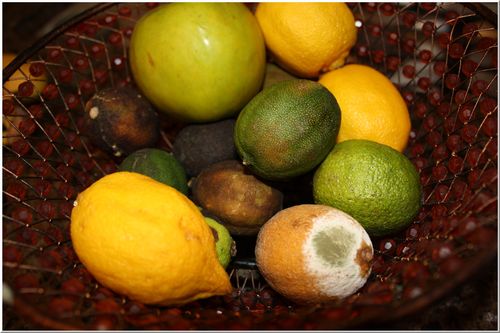 from the fruit archives: Orange you glad I didn't say banana? 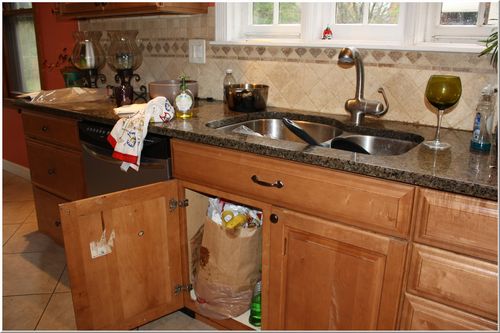 The intersection of optimism and delusion drives the parenting practice known as "Hint Staging."1 Here the cabinet door has been left ajar to suggest "someone needs to take the garbage out."

1Hint Staging is among the least effective2 methods of getting teenagers to participate in household chores.

3 Unless you are talking about the whole numbers that appear on the corners of U.S. currency.

This week on CSI: Suburbia

EPISODE SUMMARY: The science may be sketchy, but investigators can't shake the suspicion that a freshly mopped floor was a contributing factor in a high school boy's decision to attack his sister with a squeeze bottle full of imitation maple syrup.  Monday, 7:45 a.m. 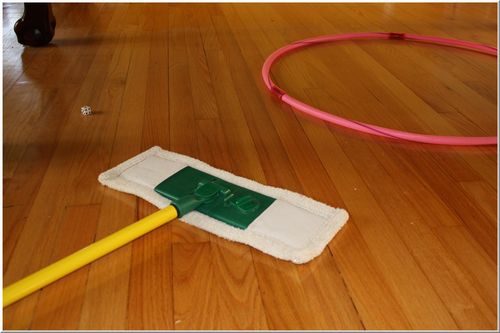 An excerpt from my forthcoming autobiography:

There were days when I began to doubt my decision to declare the vacuum cleaner off limits to the rest of the family, days when I secretly missed the excitement of never knowing what would turn up inside its twisting and lint-clogged recesses. Miniature weapons, spiral notebooks, international currency: it was like finding a spy novel buried in a landfill.

I never did figure out how they did it. They vacuumed everything in their path, never stopping until the vacuum did. It was a landscape of forgotten toys, half-eaten snacks and dirty laundry. We went through so many vacuum cleaners in those years.

Then one day it came to me as clearly as if it were written in the flowing black ink of my favorite uni-ball Impact 1.0 mm gel pen: They had vacuumed up one of my favorite pens again and there was nothing I could do but dismantle the hose and clear the clog, releasing a cloud of dust that would have to be vacuumed a second time.

It was, as they say, one of those ah-choo moments... from the vacuum bag: All over but the vacuuming, Tricking your husband into buying a vacuum cleaner on Mother's Day: Priceless

Top 10 Dinner Ideas Your Teenagers Will Love. Not.

6.  Not ready for another half hour

5.  Not made with cheese

2.  Not served with mashed potatoes 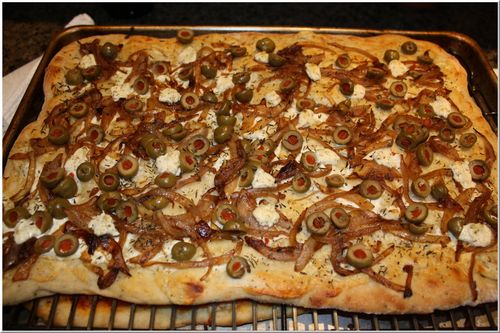 Photo: Onion tart courtesy of the Suburban Overachiever, whose pastry skills are matched only by her skill at pretty much everything else.

Is it just me or is it starting to seem like our 80s-era prom dates were just phoning it in? 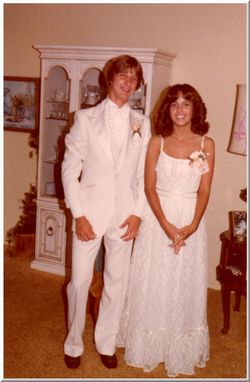 They rocked their powder blue tuxes, sure.

But I do not remember any prom "proposals" that looked like this.

The only thing 80s guys did in advance of prom night was buy a corsage, wash the car and harbor wild hopes.

The "proposal" usually took place at your locker between classes.  Or was delivered through intermediaries bearing notebook paper folded into little squares.

Not that it wasn't perfect.

Today's Romeos are expected to produce a spectacle of choreography and multimedia finesse. They are, after all, trying to impress a generation of girls who still know all the words to the songs from High School Musical and never miss an episode of Glee.

At a bare minimum, there must be balloons or flowers. But 150 of your closest friends spelling it out with light sticks is a better way to go, according to my sources.

Part of me really wants to applaud the teenage girls who made this happen, even if the inspiration is borrowed from television and movie scripts. Part of me is thinking: Yes, it's a huge step forward for romance, but what is it going to cost me?

Note to Boy, Esq.: When I was in high school, the boys had real jobs and prom tickets were $3. Also, my hair looked like that on purpose.

from the romance archives: Top 5 Ways Middle School Boys will get it wrong on Valentine's Day, Match.com Junior High, Flush with Romance

Women We Hate: a flow chart

Isn't it time to retire that pathetic old stereotype about women hating other women simply because they're beautiful?

I don't know what sort of crazy Texas cheerleader coven Samantha Brick found herself living among in the French countryside, but the rest of us left junior high behind in high school.

Or by our sophomore year in college at the very latest. That sort of 1950s era insecurity is so 2011.

Modern women are capable of judging each other by a wide range of criteria. I can't even count the number of women who have decided to hate me just because my imaginary boyfriend is a British secret agent. Or because my laundry seems so much more glamorous than theirs.

My point is, for Brick to suggest that she has earned the status of a woman hated by other women on the basis of looks alone simplifies the nuanced process by which such decisions are actually made.

Which is why I've created the following chart to illustrate the process. 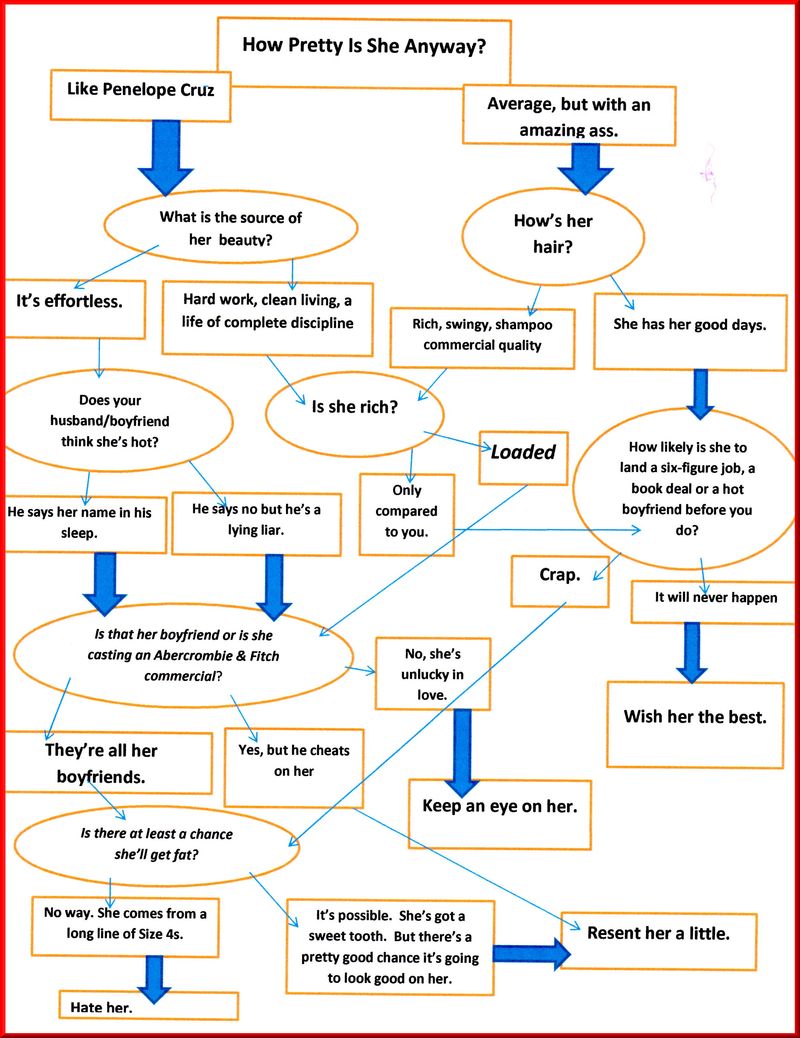 from the beauty archives: In which I run out of paper trying to solve the latest beauty formula

I learned the truth in Seventeen

10. One reason the Euro holds together is fear of financial and economic chaos on an unprecedented scale. *****

* Completely true. It's my Key lime mustard sauce for peel-and-eat shrimp. Leave me a comment if you want the recipe, or help in identifying your own secret sauce. ** Srsly. Don't even think about it. *** Duh. It's your parents' money.  ****  OMG! So true.  *****  Just kidding. That one I learned from The Economist. 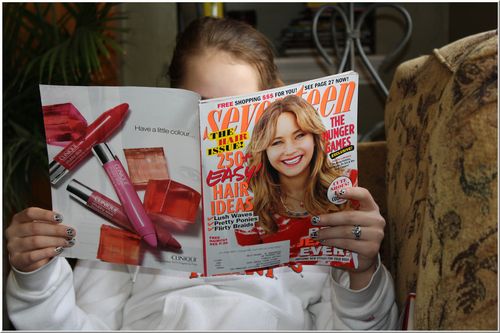 When I asked the kids last week about coloring Easter eggs they gave me the same look they use to demonstrate their enthusiasm for "Not Eating at Wendy's Night." It was clearly a no-go.

I took it as a sign that we could add Easter to the list of holidays we no longer had to pretend we cared about for the sake of the children.

But teenagers can be such sticklers for tradition. Which is how I found myself with 270 pounds of teen in my face first thing Sunday morning, demanding: "Where are the Easter baskets?"

"Where is my coffee?" I said, thinking maybe, just this once, I could trick them into doing something nice for me.

In the end of course, I made my own coffee and filled a basket with candy I'd been hiding behind a chair in the office.

Then we made Peep and Tonics with the neighbors, set the teenagers loose on the little kids in a Hunger Games-inspired egg hunt and feasted on everything that could be baked, grilled and topped with a marshmallow chick. 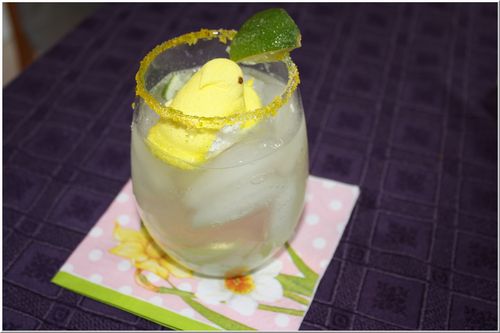 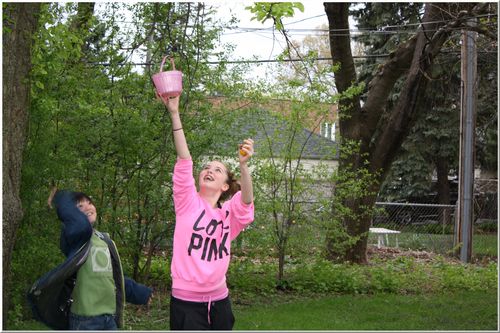 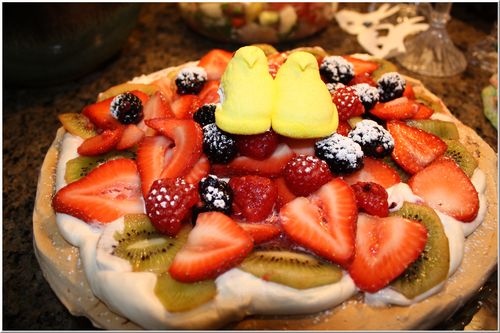 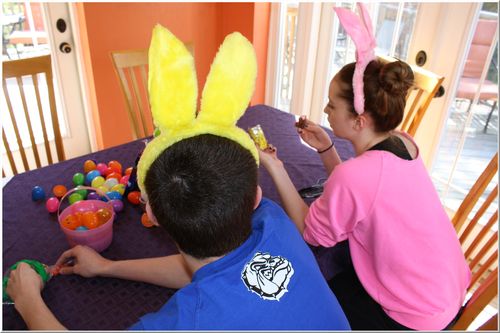