« This just in from the Middle School Breaking News Team: | Main | How to get a man to have sex with you during the zombie apocalypse »

I wish to apologize in advance for next week's record snowstorm.

Temperatures are expected to reach 80 degrees. And the sun is totally visible.

But the hardy people of the Midwestern suburbs are unconvinced. They've seen this kind of thing before. They know.

All that stands between them and a late season snowstorm that will bring traffic to a standstill and swift death to the presumptuous array of foliage that has sprung too soon from the earth are the weather gods. And me.

Having come from a land where the only two seasons are Patio Furniture in the Pool and Patio Furniture out of the Pool, I do not share their sense of caution. I moved the palm trees outside a week ago. Yesterday I grilled chicken with lime and I didn't even have to sweep snow off the grill.

Today I am thinking of opening Margarita Season. Unofficially, of course. I am not a total idiot.

The locals are skeptical.  "Don't do it,"  they warn. "Make some sort of vodka drink instead. Anything but Margaritas. You will only anger them."

"But there is no mint for mojitos," I say. "Mojitos?" they hiss. "Are you out of your mind? Do you want to bring about Snowmageddon?"

"It's practically April," I say cautiously.

"Hah," they say. "April." They practically spit the word.

They shake their heads and check their supplies of salt. Not the kind you use for the rim of a glass. They do not even think of putting the snow shovels away.

I know they're right. But the blue skies are too hard to resist. Also, I am new to these parts. The weather gods probably don't even know who I am yet. Besides, the high school girls have been wearing shorts for weeks.

It won't be all my fault. 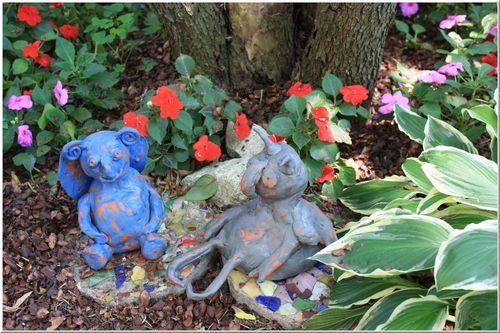 Photo: A pair of weather gods discuss plans for next week's record snowfall.

from the weather archives: A blizzard runs through it, Storm warnings call for a little Midwestern pluck, Things that did not survive the winter

Posted at 11:14 AM in 99 Reasons to Drink in the Suburbs, Insincere Apologies, Midwestern Diary | Permalink

So you say if I hang out enough laundry I can end this drought of ours? Time to wash every quilt in the house.

No wonder it's still winter here in Oregon. I had no idea I'd been angering the weather gods.

No problem, Irish Coffees are good, too.

Margarita Season sounds like my kind of season! When does it start? As soon as the flip flops are broken out - because if that's the case then that means it started yesterday for me!

As long as you don't break out the frozen Margaritas you should be safe from the weather gods and their moles and gnomes. Kind of busy here. Loading my patio furniture up to take over to Liz's and dump in her pool. Because, it is April...and I don't have a pool.

*We cannot be held responsible for every weather event between here and the Pacific Northwest.

THIS is how you know you are a Midwesterner (or not): you are too afraid to wash the snowpants and mittens before May 1, even if it's 80 degrees out, because doing so will with 100% certainty actually CAUSE a snowstorm.

Since it has snowed on my birthday (April 28), I understand the sense of caution.

Since I did not actually grow up in the Midwest, however, I am not fully convinced that the water from the washing machine (or the melted ice that puddles on the counter when making margaritas) actually mainlines up to icy clouds to return to earth as a blizzard.

In short: if you need a margarita drinking partner, I'm your girl.

We are in for it now. Might be better if we all just head down to Liz's and drink Margaritas on the patio furniture in the pool.

If you haven't planted tomatoes, I wouldn't worry about it. You're good. Plant tomatoes and see everything get all Fupped Duck in a hurry.

One more reason to continue my practice of soliciting freshly-grown handouts instead.