« A teenager's guide to time management: So easy you won't believe you didn't think of it first | Main | This just in from the Middle School Fashion Desk: »

In the ruins of a place that was once a perfectly clean kitchen lies a frying pan glistening in butter and batter-coated bread. One boy and one girl, ages 14 and 17, will take up plates against one another. Only the batter-maker stands between them and breakfast. 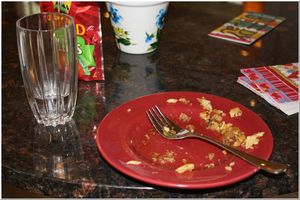 The French toast has just started to brown when the boy comes to stand over me.

At 17, he's slim, but strong. Three years of swimming and water polo have left him with muscles and reflexes his competitors do not share. Also, his competitors are still asleep.

The plate is already in his hands.

His eyes never leave the spatula as it slips between the bread and butter. These are the first words of the day and I ignore them, knowing from experience that no answer will satisfy him.

There are only six slices of bread left; four in the pan and two heels in the bag. These go uneaten when bread is plentiful, in the first days after a grocery run. Not today. Especially not after they have been battered, browned and covered in imitation maple syrup. Today every piece is a prize to be fought over. The boy's eyes flicker across the nearly empty bread bag and he begins to calculate.

The stakes are higher than usual; we are running low on syrup too.

The girl's disadvantage looks insurmountable. She's younger, smaller and, being asleep, knows nothing of the bread shortage.

But the boy's face has lost none of its concentration. He takes nothing for granted. She could wake up at any minute. Also, he suspects the game is rigged. How else to explain that she seemed to know where the Girl Scout cookies were hidden? And why are her chores always so much easier?

He is right to be wary. Because I also have a strategy, honed over more than decade of carving, scooping and counting out treats for the beady-eyed little forensic accountants known as "children."

I will divide the pieces evenly, leaving each player with three pieces, including one heel.

But I miscalculated by not using the heels first.  Now I've got four premium pieces coming out of the pan at the same time and only one competitor with a plate in the ring.

I slide two pieces on to his plate and move on to coating the heels in batter as if I do not notice his still-waiting posture.

"What?" I say finally. "Two for you, two for your sister. And one heel apiece."  He sputters, objects, says something about her not even being awake.

His face falls and for the first time, you can see that he had really allowed himself to believe.

"You pick now to start being fair," he says in disgust.

from the archives: How to feed 4 teenagers for 2 weeks for under $1 million

Posted at 12:43 PM in Boy, Esq., What Passes for Parenting | Permalink

SK, I love your blog, but this may be my favorite post of all. (Perhaps because I'm 2/3 of the way through the first Hunger Games book.) Brilliantly written, this entry.

I'm glad you liked it. I hope it didn't spoil the book for you. It's a very compelling story as long as you can suspend knowledge of the fact that in real life, teenagers will fight to the death over bacon.

best sum up of parenting ...

"honed over more than decade of carving, scooping and counting out treats for the beady-eyed little forensic accountants known as "children."

They never count the chicken in chicken a la king.
"

No, but they could weigh it, couldn't they? Or measure it down to some fraction barely visible to the naked eye? Either way, the king's chicken would not go uncontested, if only on principle.