Pretend to have just discovered a $20 bill in the laundry you asked them to fold two hours ago. 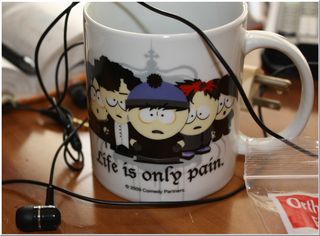 Ask, "Who left the pile of dirty dishes and a $5 bill on the counter in the basement?"

Announce that you are raising their allowance by $1 a week for every chore they successfully completed last week. Do the math.

Hide the television remote under the pile of wet towels on the bathroom floor and demand that they pick them up immediately.

Pretend to have run into a group of their friends at the grocery store. Say, "such nice kids."

Set their alarm clocks for morning.

Create a fake press release announcing the switch to a year-round school schedule.

Change their Facebook status to "Hanging out with my Mom."

Pretend to read from a newspaper story describing a recall of Axe products after it is discovered that the popular line of men's grooming supplies contains a chemical compound that actually repels sexual attraction in teenage girls.

Leave a fake grocery list out on the counter that includes every variety of Pop-Tart.

Call them from the grocery store and say, "tell me again what kind of Pop-Tarts you like?"

Pretend to have just volunteered to speak to their Health class.

Imply that you have hidden Pop-Tarts in the garage.

Posted at 05:45 PM in Holiday Traditions I Just Made Up, Teenagers | Permalink

I would only add, offer the live birth tape to the health class. We have someone who does that at my kids' school. She accompanies the tape to talk about it.

That is brutal. If that woman lived in my town I would not stop lobbying until there was a statue in her honor somewhere.