Cookware Chronicles, Part II: In which a raclette maker also calls to us and we are sauteed by indecision

The Backstory: The author, who suffers from aspirations, is taken in by a New York family's description of how a piece of Williams-Sonoma cookware changed their lives.

Was it fear of commitment that kept me afraid of committing to the oddly-shaped Nordic pancakes known as ebelskivers? Or something stickier?

And where was the satisfaction in that? 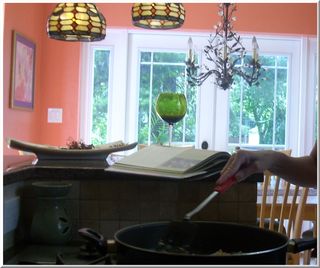 I was looking for something to build a tradition around, in which we would be a completely different family than the one currently occupying our house.

We'd be a family for whom a meal was an unpronounceable mix of new cultural experiences built around cheese and good wine. The children would use forks.

But I was beginning to doubt that ebelskivers were the answer.

As much as I liked the sound of ebelskiver, there was also their resemblance to doughnuts, which are very hard to pair with wine and taste like something a 16-year-old boy would make for dinner, if somebody else were there to make it for him.

It was then that I turned my attention to raclette, a cuisine, that according to its Wikipedia entry:

"... was mentioned in medieval writings as a particularly nutritious meal consumed by peasants in mountainous Switzerland and France (Savoy region). It was then known in the German-speaking part of Switzerland as Bratchäs, or "roasted cheese." Traditionally, the Swiss cow herders ... "

The factual accuracy of which is "in dispute" and which only raises more questions than it answers. How, for example, had medieval peasants gotten their hands on the Williams-Sonoma electric raclette maker, with its 8 individual broiling trays and spatulas, granite grill top and adjustable thermostat?

I was beginning to see the makings of a new weekend tradition - one that had both cheese and controversy going for it. Williams-Sonoma, it seemed, had a dark side after all...

Next: In which it is all revealed to have been a dream. Except the teenagers are real and I am still leaning toward the raclette maker.

Posted at 07:42 AM in This Week in Delusional Thinking | Permalink

Raclettes? Really? I want the real full-on Racles if I'm going to go to the trouble of learning all that Nordish crockery culture.

Cookware Chronicles Part Deux--- Who won? I'm pulling for Ebelskivers because I think you are taking advantage of our dim grasp of the Nordic culture beyond Girl with the Dragon Tattoo and just MAKING up WORDS! (ooooo takes me right back to a certain Scrabble game ...which turned into a scuffle--words with friends indeed!)

Half the words in the Williams-Sonoma catalog are made up. There is no such thing as a "pork crouton" in real life.

Nordstrom's is a real place, however. I've been there.

Pork Crouton? Is that what people do with stale pork? Nordstrom's may as well be in Iceland (wait I'm mixing my Nordic geography here) for all the chance I'd have of getting through their doors. I barely get into Macy's and then only with Liz escorting me. Really, they can smell the Wal-Target-Mart on me.

No one can actually afford to shop there. That's why we go to Nordstrom's Raclette.

I only read it for the recipes.