« Coming soon: A Christmas sweater throwdown so appalling you will want to pluck out your eyes... | Main | »

The No-Limit, How Low Can We Go Christmas Sweater Throwdown: Holiday magic and a miracle of bad taste

Your holiday fashion guide, pulled from the archives of Christmases past:

When the Executive and her teenage daughter claimed they had the jingle balls to wear holiday-themed sweaters in places where they would actually be seen, the girl and I dropped everything to rise to the challenge.

We would find the most appalling holiday sweaters the Midwest could produce; social suicide in a cable knit. 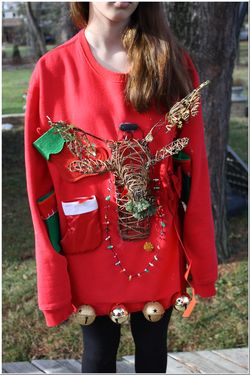 When it comes to public displays of foolishness, we run in pretty competitive circles. We aren't even 5 minutes into the throwdown when the Executive and her daughter start in on the trash talk.

"I will wear my Christmas sweater in first class," brags the frequent-flying Executive.

Her daughter, a 15-year-old with ordinarily impeccable fashion sense, claims she will wear our sweater to a Justin Bieber concert. How my daughter's eyes lit up at the thought of that!

And so, it was on. The 2011 No-Limit, How Low Can We Go Christmas Sweater Throwdown. As it has developed so far, the rules go something like this:

1.  An exchange of sweaters shall take place between two mother-daughter teams. Team Kamikaze selects the sweaters to be worn by Team Executive and vice versa.

2. Points are awarded to team members for skill in procuring the most appalling sweater possible and for risking the greatest amount of social currency in wearing such a sweater in public.

3. We will post the pictures as we go and you, our devoted reader, can award points in the comment section. Or stars if you prefer. Whatever. Create your own system, but be sure to use decimals because that makes the judging seem more professional.

I won't lie to you. We like our chances. Because we didn't take any. We started at Goodwill. And went downhill from there.

Girl Kamikaze's creation is just about the cruelest thing I have ever seen. She is in her third year of middle school, which is pretty much like having a Ph.D. in Social Cruelty. If she had a little more time, I am pretty sure this sweater would have a Christmas tree attached somewhere. Girl Executive may be the first teenager in Justin Bieber concert history praying that he will not notice her.

My vision for the Executive is, by comparison, a fairly restrained little number. I can see her wearing it as she settles back into her extra wide seat among the better class of people, jingling with entitlement as she reaches for her cocktail, sending out gleaming arrows of reflected light upon the faces of the rabble as they make their way back to steerage... 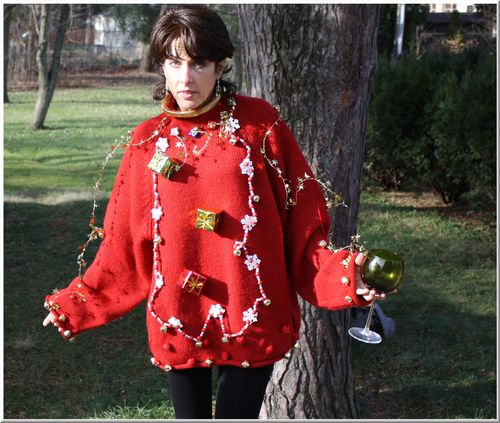 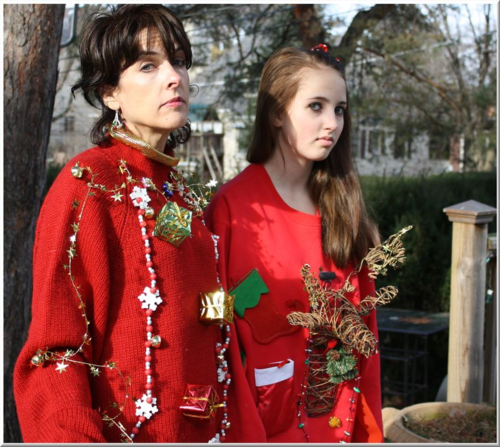 Team Kamikaze: Please. We are going to own this.

Posted at 08:25 AM in Holiday Traditions I Just Made Up, Seasons Bleatings | Permalink

You still have time! Add some blinking battery powered lights to Girl Kamikaze's entry---preferrably within the skeletal remains of road kill reindeer, and I think you have it won. On the other end of the spectrum, the SK's entry is so precious it may actually become a fad--so I don't like your chances. The SE may have you by the Christmas balls on this one. I believe her entry has actual lit candles attached with a small peppermint swirled fire extinguisher on a gold lame belt. The upside is you won't have to pay to wax your eyebrows for another couple of months...

Those ARE blinking lights around the reindeer head.
The girl really managed to make my efforts seem almost tasteful. There was no way to keep up. I sewed a bell on, she sewed a bigger bell...

I really wanted to add musical armpits, but I ran out of time.

We still have about 6 hours before they arrive, but I'm having a hard time thinking a Christmas sweater from Miami is going to be all that competitive...

Oh, the full length view shows your entry in a MUCH more competitive light. You are truly ready for lightning, aliens or drunken elves--whatever Christmas throws at you, thought it appears Christmas has already thrown quite a bit at you and it all "stuck." I am recalculating and you may win the golden glue gun yet! Of course you know how the Executive's team thinks and CGI may not be out of the question. It's all fun and games until someone falls off of the Burj Khalifa building...Perhaps if one of those little boxes could launch rum balls?

It's not nearly enough is it? I have just returned from Christmas at the South Side girl's - where she managed to glue more Christmas dazzle to the outside of a bra than I used on the entire sweater.

On the South Side apparently, the Christmas sweater is worn over Christmas underwear. We are such amateurs.

next time, you might want to add some bedazzling. but as is: still a vision, possibly not unlike one had by one mr. e. a. poe.

There is simply nothing that can possibly top a 3-D artistically grape-vine reindeer head mounted on a sweater. It's like a terrible Christmas sweater meets taxidermy. Inspired would not be excessive. Yours could use some greenery attached, however.

I hope we are going to be privvy to further contest photos.

We've had offers from other people who actually want to wear these sweaters in public. And yes, mostly the taxidermy sweater. Perhaps we will send it on a cross-country tour. Neither sweater has yet had a fully public airing yet - and trust me, they could really use some airing because we forgot to wash them first - but as soon as they do, the photos will appear here.

Did I mention I'm moving to Galena, IL next month? Mmm, if I see you on the street and you're wearing that sweater, please understand I have a reputation to build there in case you see me running the other way.