« No apparent motive in latest wave of sock abandonment | Main | New Hannah Montana pajamas are the best of both worlds. »

I won't lie to you. My first reaction, when I saw that the U.S. Supreme Court history and the doorstopper of Constitutional interpretation had been pulled down from the shelves, was a little surge of maternal pride.

I was pretty sure the teenagers were using them as drink coasters. Or possibly dinner plates. And while I don't approve 100 percent of using books for this purpose, it's the kind of thing that would represent real progress in our house.

"Finally," I thought. "They're making an effort."

But, as it turns out, the eighth-grader has been using them to prepare for her role in the upcoming middle school production of Charley's Aunt, in which she plays a proper young English lady at Oxford in 1890.

In the late 19th century, apparently, young women wore legal tomes as hats. While watching television on the couch. 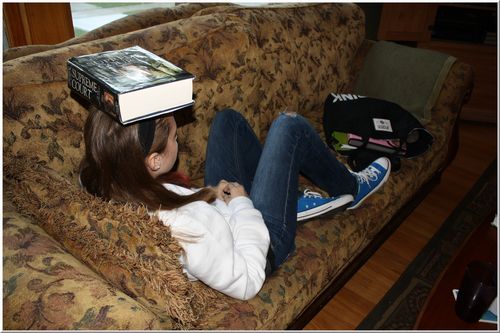 Posted at 07:47 AM in Girl Kamikaze | Permalink

All you got to do is say Victorian and I’m “on-it!”

But honestly, don’t insult my onliest one intelligent with this “look at what my kid is doing” - on her own business.

Face it, you’re a backstage mom and you’re pushing your kid to the extreme to do anything to get a part, to include bending the Constitution - not to mention the flat spot on your child’s head - that will never go away.

This is a strange behavior I have never observed before. It could be because I'm not an actress or a Victorian woman though.

The Victorians were apparently very big on precedent.

I think it's easy to learn this way...