We settle into French country life with all the grace our four-teenager life in the American suburbs has imbued in us.

We break into the wine, pose for pictures with the pet sheep and strip the garden of fresh strawberries, tomatoes and carrot tops, which we mistake for parsley. 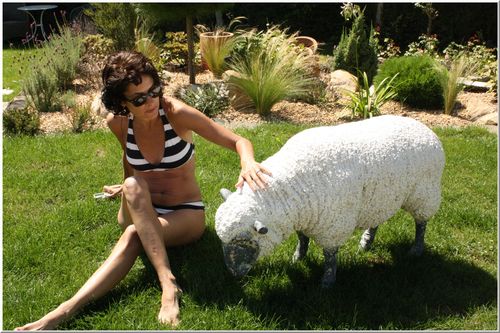 There are five of us on this trip, the Suburban Executive and I, our teenage daughters and the incredibly talented Fort Lauderdale photographer Rick McCawley, who has come along as our designated driver, teenage wrangler and travel guide. He is also the photo master, patiently coaching me on the secrets of his art: "You're going to want to take the lens cap off," he tells me.  It makes a huge difference, believe me.

Here is an actual unretouched photo I took of my feet at the beach in Dinard. 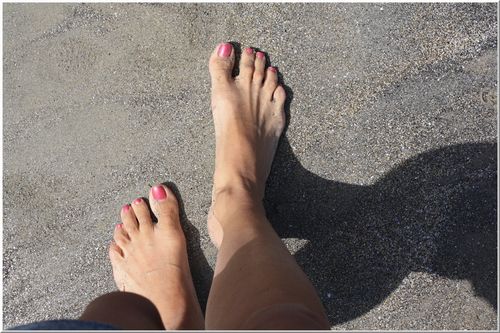 On this portion of our trip, we are in Bretagne, about half an hour from the rocky coast, in a suburb of Rennes surrounded by works of French impressionism that double as actual hay fields.

Our success in ordering extra bread and "more wine please" in Paris over the last several days has left us feeling very authentic and we believe we are ready to take on the Breton customs like natives.

We begin at the grocery store, where my Dirty French guidebook is not as much help as you would think.

We decide to prepare the local delicacy known as "moules aux vin" which translates roughly to "moules aux wine."

The hardest part is figuring out the system at the French seafood counter where a handsome young man is scaling a fish for an attractive young woman in front of me with all the deliberation of a young man scaling a fish for an attractive woman. He moves as slowly as possible, but he cannot escape the inevitable; the last scale will fall and the woman will disappear from his life forever.

It is a classic French story, except for the part where the impatient American tourist interrupts repeatedly to ask things in a language she believes is French.

Handsome young fishmonger: Do you think she was flirting with me?

Me: I think I have never seen a man scale a fish with such deliberation.

Handsome young fishmonger: Here are your moules. Be sure to prepare them exactly as I am explaning to you in rapid French if you do not wish to die. Also, that parsley you believe is growing in the back yard? Those are carrot tops.

Me: Yes. Okay. Please. Good afternoon. Thank you and goodbye. Can I buy you a drink?

Somehow, I manage to leave the store with a bag of fresh moules, some lemons and many bottles of wine.

Preparing the moules turns out to be very easy: You soak them, trim their little beards and simmer them in a mixture of white wine, olive oil, lemon, spices and fresh parsley from the garden. As a variation, we substitute carrot tops for the parsley.

When they begin to open in the pan, we remove the moules with a slotted spoon, which I know from five years of French class is called a slotted cuillère.

Actual Bretons serve them with pommes frites, dipping them into the leftover juice.  We pour them over spaghetti because French fries are a lot of work and frankly, dipping French fries into mussel juice is just a bad idea no matter how much Cote dû Rhone you drink. 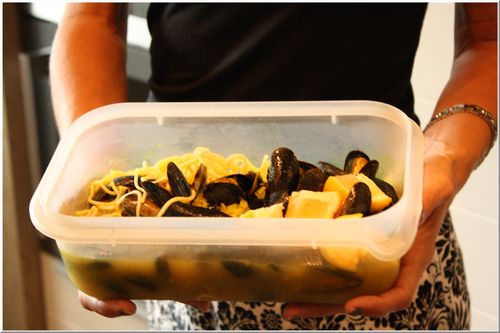 They are delicious and we congratulate ourselves on our unbelievably authentic French country selves.  Then we drink wine by the pool just like a couple of French farm wives. On vacation. Is it just me, or do the pictures here and elsewhere reveal something distinctly suburban about the so-called French "country?"

And the book you are reading on the Kindle, although it may be ABOUT someone French (this Madame de Nucigen person), is clearly written in English.

I'm beginning to suspect this entire "French vacation" is an elaborate blog stunt and that you have traveled no further than Naperville. (Which, after all, can be made to sound vaguely French, if one holds one's nose when saying it.)

Which of course I would never remember.

My next post will include a photo of the unmistakably French bathrooms in wine country. Or possibly the French country washing machine that we nearly destroyed with our ignorance of French laundry terms.

I don't what it is about that sheep that is so appealing to me.

Makes me want to pour a glass of Côtes du Wôôlite.

I know what you mean. This was in the backyard of the house where we stayed. We fell in love with that sheep and I don't think it was just the Cote du Rhone talking. There was also some pretty good Bordeaux and a nice Languedoc.

I thought you were going to cook a MULE. Now THAT would be some awesome French cooking.

I'm sure it would be délicieux. It's just a matter of having enough butter. And a pool full of wine.