« A big, well-lighted salad | Main | From the kitchen at Camp Teenager »

Greetings from Camp Too Many Kids, where another season has just opened with the traditional "breaking of the glass."  It was just a drinking glass - nothing as dramatic as the 2009 Indoor Football and Pear Throwing Championships - but it is still early.

Summer camp is a beloved tradition in our posse in which one member gets to keep all of the children while other members languish in luxury hotels and exotic travel destinations. I get the nicest postcards! 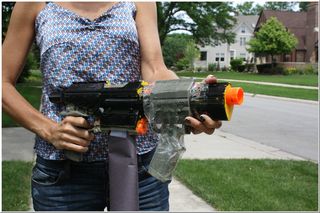 This year's opening glass incident occurred in the driveway where the adorable teen girls known as the Whimsey Twins had set up a sunbathing station and mini bar and where our camp director had firmly recommended the use of plastic cups just moments before. Our campers, however, are sticklers for tradition.

Congratulations by the way, to whoever had Day 1, 2:16 p.m. Central Time in the broken glass betting pool! First blood, not coincidentally, followed at about 2:19 - just after the "no bare feet" directive was issued, and as tradition requires, ignored.

The injury, as always, was sustained by the older of the Whimsey Twins, a darling 14- year-old media executive whose capacity for finding sharp objects with her feet is unmatched.

She and her co-conspirator, 13-year-old Girl Kamikaze, show no interest in canoeing, archery or any of the other camp activities not actually offered here, but they have signed up for multiple spa sessions and a "Chicago Cupcake Tour," where they will eat their weight in cupcakes and then try to con me into taking them shopping for shoes.

The 16-year-old boys, on the other hand, have spent pretty much every minute so far visiting Camp Teenage Girls Across The Street. I do not even remember when I saw them last. Also, I have never enjoyed them quite so much.

But I know better than to be lulled into false security. At some point they will return, demanding money, Pop-Tarts and bacon and filling the house with the smell of their dirty socks.

from the Camp archives: How to Feed Four Teenagers for Two Weeks for Under $1 million  from the Whimsey Twin archives: Putting the "pool" into "pool table"

Posted at 04:41 PM in Teenagers , This Week in Suburbia | Permalink

It's only too many kids when mine hits, which he won't as he is in weight training 3-4 days a week and Mom boot camp the other 3-4. By the way, I had 12 noon in that pool so I would say that things are actually going better than expected...

I am pretty sure we all went under. I don't think there was a dime riding on Day 2.

I do not envy the Camp Director. Here at Camp Cactus, we are midway through week two of Beagle Boot Camp, involving two Very Large campers of the Labrador persuasion and one Very Strict Beagle Drill Sergeant, prone to harassing the three enlisted cats.

We are a pet-free teen camp. Which is probably a mistake. We could use some help disposing of the pizza crusts in the couch cushions.

Obviously, we need to be COMBINING summer camps. The teenagers would have a whole lot less time to make messes if they were responsible for keeping 2-4 children in the 5-7 year old range alive till the end of the two weeks. Also the 5-7 year olds would be less likely to whiiiiine about boredom if they had teenage boys with whom to "play sports" (scare quotes indicate mis-matched skill levels) or girls with whom to bake. Win-win all around. Especially if the whole lot of them alternates between your house and mine and my friend Holly's, one week each.

They would learn so much. Those little girls would be able to apply mascara while text messaging by the end of the week.