« A 13-year-old can make her own breakfast. But you don't necessarily want to know how. Or what. | Main | Zombie revelers flee invasion of June brides »

It was his shoes I noticed first.

I was not the first woman to fall for his shtick. That much was as plain as the big red nose on his face. The guy got around. In a very small car.

What can I say in my defense?  We are born at the rate of one a minute.  I think P.T. Barnum said that. But it may have been bestselling Chicago author James Finn Garner, who has started our summer reading off on exactly the right note: clown noir. 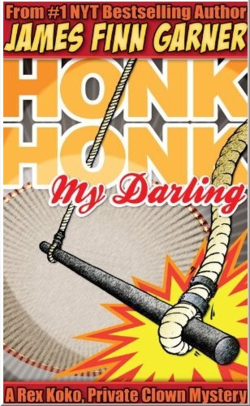 Because vampires are so last week. Also, werewolves never did anything for me. But there was something about Rex Koko, private clown, that made me want to go put on a little more makeup.

JFG: You know what they say about big shoes.

SK: I do now. I admit it. I took your clown to bed. Woke up feeling funny.

JFG: That is what they call the smile that doesn't wipe off.

SK: It was more fun than I ever remember having at the circus. But please, don't let this series go on forever. I have to finish Moby Dick someday. Would it have killed Melville to throw in a clown?

JFG: By that point in his career, he had given up trying to please his audience.

SK: Are clowns the new vampires?

JFG: Clowns are bringers of chaos. Their red noses are meant to represent drunkenness, and their white faces are a reminder of death and immortality. (I'm not joking - this is what scholars and theater experts have said.) Vampires have two reactions to mortality: they either embrace it somberly like Bela Legosi, or they mope around broken-hearted like Lord Byron and Edward. Clowns look Death in the eye every day and pour oatmeal down its pants. They can be much more bad-ass than vampires because they just don't give a damn. Whether readers are ready to embrace this existential approach is something I'm looking forward to testing.

SK: I liked the bathtub scene, but whatever. Who would win in a fight between a clown, a vampire and a werewolf?

JFG: Vampires tend to avoid clowns, as they supposedly "taste funny." All a clown would have to do is put a few drops of holy water in his seltzer bottle, and the fight would be over. And werewolves are just freak-show dog-faced boys who've been working out. The way to handle them is a rough belly rub.

SK: Does Rex Koko have a signature cocktail?

JFG: Yes, it's called a Pratfall. In a chilled highball glass, strain 4 ounces of Sterno through stale bread, add a dash of cotton candy, and add plenty of seltzer. Stir briskly and spill immediately. Repeat. This is a big hit at the clown bar in Top Town, the Banana Peel.

SK: Who gets more women, James Bond or Rex Koko?

JFG: In Top Town, Rex's pal Bingo is the king of the womanizers. As Rex says, "The crack of dawn better watch out around Bingo." Many women cruise the Banana Peel for clowns, but Rex has more self-respect than that. He doesn't waggle his balloon just anywhere. He did have an affair with his friend, formerly the world's daintiest fat lady, Lotta Mudflaps, in the past, and many rumors fly about what really goes on between him and Daisy the Elephant.

JFG: If it's a musical Rzeznick. If it's straight drama, French actor Dominique Pinon.

SK: Wrong. The correct answer is Daniel Craig. What is the best method for getting makeup stains off the sheets?

JFG: Simple. Sleep in a haystack.

SK: Now you tell me.

I know this tidbit will send you into a panic of disbelief, but I'm related to Larry of the Three Stooges. Uh-huh.

Was that the cute one or the smart one?

Larry was the middle Stooge with Bozo hair. BTW, based on your review I have already purchased Honk Honk My Darling AND found and purchased Politically Correct Bedtime Stories----looking forward to sharing both during the weekly compare Kindles at my kid's baseball practice. Beats the heck out of The Help. Thanks SK

Apocalypse Wow! is also a really good excuse to put down Ulysses - not that there aren't plenty of other good reasons...

Now I really want to read this. In my spare time. Which means, probably not until the Tuesday on which Wimpy pays for that hamburger. But it sounds fantastic and more fun than the summer reading list I have planned.