Trash talk from a woman wearing an apron

My neighbor, the one I call "Mary" because they're pretty much all named Mary in these parts, gives me about five minutes notice.

"We're coming over for margaritas, baby girl," she says. "Get your lime on."  She's bringing the one they call "Kate."

"I'm going out for drinks in the city," I object. "With grown-ups."

Yeah, they're grown-ups all right. Grown-ups with about 11 kids between them. Some of them theirs, some of them strays. I have never seen her with fewer than four.

"How many what?" she asks innocently.

"How many children are with you?"

"They will just play in the backyard," she says, an evasion that suggests double digits.

"Fine," I say.  "But I can't drink margaritas in the afternoon and go out for drinks in the evening."

"And you call yourself Irish," she says.

"I call myself Kamikaze," I say. "I'm pretty sure that's Japanese."

She sits on my deck a minute later drinking Mexican cocktails in a woodland-themed apron she has worn deliberately to provoke me into saying something about Midwestern women. As if her shoes weren't enough.

I refuse to take the bait. Even when she starts telling me I made the drinks too weak. "Someone needs to teach you how to make a margarita," she says.

But I do take her picture. She's adorable. She looks like she should have a tray of cupcakes in her hand.  They would be terrible cupcakes, and she would break them into little pieces and scatter them among the children like chicken feed, but still. 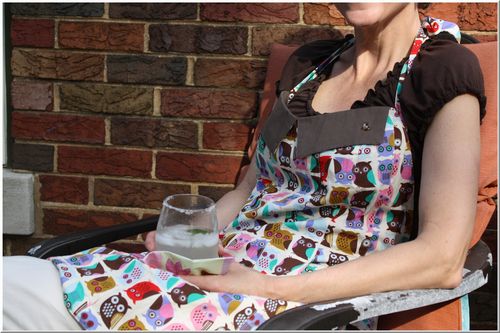 from the Something about Mary archives: Some people claim that there's a woman to blame

Posted at 06:03 PM in Midwestern Diary, Something about Mary | Permalink

When you guys get to wearin' dirndl's, wake me up.

Regarding midwestern drinking habits: my brother is in the restaurant business in Las Vegas. 14 years ago he spent a year in Chicago opening a new restaurant. He LOVED the city, but said that he had never seen people drink more hard liquor, midweek, at lunch, in his life. Sounds like my kind of people. Must I wear the apron?

It's a good thing you had those margaritas first, in fact, since we were waaaaay ahead of you--dipping into our second pitcher of sangria--by the time you'd arrived. Just think if you'd met up with us while you were stone cold sober and your tongue wasn't wearing the memory of a recent sip of something tasty...it might have been too much to bear.

Also, what do you think it would take REALLY to convince Foolery to join us in the midwest? Promises of no aprons required? Foolery? Care to weigh in?

I'm pretty sure the aprons are mandatory. I tried to wear one as an ironic gesture once and was repeatedly complimented on it by women who wanted to know where I bought it. Major irony fail.

But it is also the only place I've ever been offered a real drink at a kid's lemonade stand, so yeah...

Ummm, LOVE THIS.
Good for you for not falling prey to the bait.
Next time just give her a shot with the worm, see if she's a big girl and can wolf it.

I had no idea people wore aprons to impromptu mid-day margarita parties. Where do you even buy aprons?

I got mine at Bed, Bath and Beyond Irony.