"What will you give me for this?" I say, putting myself between man and television, where a quartet of Las Vegas pawn dealers negotiate over somebody's 30-year-old collection of I-couldn't-care-less. 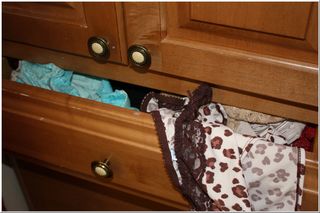 I am wearing a pair of green-light underwear, under the ridiculously obvious system I use to signal my level of romantic interest but which Mr. Kamikaze still finds confusing after 20 years.

How hard is it to recognize that any animal print pattern is a go?

Look, I say, when I go to bed wearing cheetah print underwear, I do not expect to wake up in them.

You know you are really off your game when an attempt at seduction turns into a discussion of taxonomy. There is no such thing as too obvious, apparently.

Scarred by rejection during the early parenting years when so many of his wrong-headed, middle of the night, first thing in the morning advances were rebuffed, The Suburban Man, it seems, does not appreciate subtlety in women's underwear.

Mr. Kamikaze likes to say he likes them all - on the floor.  Hah!  Don't try to convince us that you can't tell the difference between a $140 pair of La Perlas and the 3 for $10 pile at J.C. Penney. You could bring down the economy that way.

My point is, no one ever tells you there will come a day when you will have to compete for your husband's attention against a History Channel reality show set in a pawn shop.

We expect to have to work a little harder when we're unlucky enough to suffer inclinations during extra innings or a toilet replacement cliffhanger on the DIY network.

I've got contingency underwear ready in the event the Cubs ever make it to the playoffs and I know how to turn a discussion of 30-year-old plumbing sediment or door framing technique into a series of suggestions that can trump all but the most riveting episodes of This Old House.

But a bunch of pawn shop guys dickering over how much to pay for somebody's old toy collection? That is the worst idea for neglecting your wife I have ever heard. The Suburban Man cannot get enough of it.

It's like the inside of the garage or a drywall stack at Home Depot; it calls to him in a frequency I cannot hear. What's worse, I can't just override it with a better offer. I am forced to haggle.

Mr. Kamikaze looks up from the television and coolly appraises my wares.

"What are you looking to get for it?" he says.

"It's all in working order," I say. "I don't see another one like it around here."

"Let me call a buddy of mine who knows about these things," he says.

"That will cost you extra," I say. "I'm looking to make a deal right now."

I've got his attention, but he knows better than to give me what I'm asking.

"Maybe I'll shop it around a little," I say. "Or maybe I'll just go shopping. I could use some new underwear." Apparently.

We close the deal, eventually. But he drives a hard bargain.

from the Secret Life of the Suburban Man Archives: Do-It-Yourself Television

Posted at 07:42 PM in Confessions and bad advice, Date Night, Secret Life of Suburban Man, Sex in the Suburbs | Permalink

I don't know, that seems like an awful lot of trouble. I got my deal dialed in at a certain time on certain days. The second hand hits the time and deliver or be disciplined. Home Depot has all sort of little things that say "Spank Me!" If she happens to like it, that's a dividend but not the objective.

Always counter Pawn Stars with Housewives of (insert your county of choice here)because the pendulum will shift and someday maybe soon, he won't have enough Snow Leopard speedos or Iguana boxers to come between you and Skating with the Stars...

I hear you. If it was Playboy, at least we'd be in the ballpark, if not necessarily in the same league as Miss July. But there is no competing with Woodworking's Shopsmith Mark V Model 510 centerfold. That bitch has an oscillating sander.

That's what I like about electrical equipment - it has a switch.

Or maybe your approach needs to be more pawnographic.