99 Reasons to Drink in the Suburbs #2:
Teenage Overlords

I am on the telephone when Overlord the Firstborn tosses me a new assignment. Also, a pair of basketball shorts that may or may not be clean.

"Can you smell these and tell me whether they're acceptable?" he says. "My nose is stuffed up."

I would like to be able to tell you that I let them hit the floor and set him straight with a look that was glacial, frigid, bone-chilling, arctic cold - like the perfect martini described in Nannette Stone's Little Black Book of Martinis. Like one of those 1950s television dads whose wife was in the kitchen mixing him a perfect martini.

But of course, I caught them, sniffed them, approved them and tossed them back with the reflexes of a woman whose martini aspirations run closer to good enough. 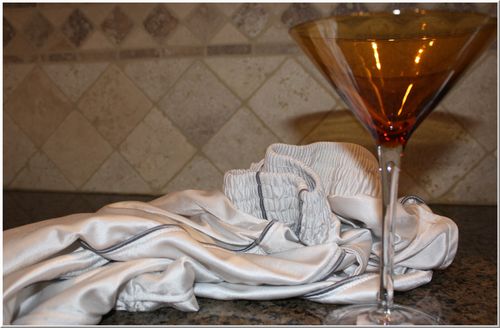 from the martini archives: There will be Peeps

Funny that the ad on your blog was for Febreze.
I draw the line at sniffing.

I would have said the same thing. But apparently I have drawn the line at nothing.

in the movie version, i would expect it to go something like this.... teenage overlord enters with sniff request, slow motion as shorts are tossed, then caught with one hand, sniffed and re-tossed as other hand keeps martini glass upright and unspilled. Camera goes back to live motion as head turns and martini downed.

A perfect take. Now all we need is a recipe. I am calling this one the Martini of Least Resistance:
2 parts gin or vodka, 1 part anything else. Shaken over ice until glacial, frigid, bone-chilling arctic cold is achieved. Or less. A squeeze of something if you have it. Or not. Whatever.

on the bright side, no one probably asked for a sniff test when he was a toddler... although who are we kidding -- we all sniffed toddlers, for different reasons, of course. i'm not certain which age smells worse, of course.

DAMN, I can't believe I just read that.