Katy Perry's teenage dream is so frothy cool and full of good looking people in convertibles and underwear that it is easy to look back and think yeah, that was fun.

Then the song ends and I think back. Katy Perry didn't even go to my school. 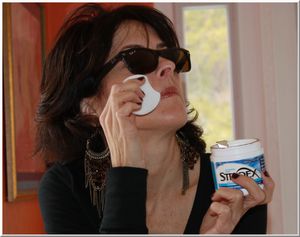 I drove a Chevette. Most of the boys who drove me around played for the school newspaper. Probably just as well I never got to see them in their underwear.

My point is, the teenage years are not all one big beach party. And you should never - under any circumstances -  attempt to catch a grenade for love.

Also? Team Werewolf is a mistake.

Do you have any idea what a werewolf at a beach party even smells like? You can take a vampire anywhere, as long as you avoid direct sunlight.

This is just as good a piece of advice today as it was in 1980. But short of making my own music video or spelling it out in bacon strips, how do I pass my hard-won teenage wisdom on to my own teenage children?

"Remember Mike Charmer!" I call after them.  But can they even hear me?

Mike Charmer was the long-legged wide receiver whose attention I sought by sending in my friend, the long-legged tennis player, to make a case for me. Which she did, in many subsequent face-to-face conversations.  In person conversation was what we had before there was Skype or text messaging. We didn't even have our own phones! What happened next was the oldest plot development in literature.  You can't even blame the tennis player. Though for years afterward, out of what I can only assume to be remorse, she struggled in vain to improve my serve ...

Literature, I explain, is what we had before there was YouTube. But over the counter acne products? Exactly the same.

Sometimes I see a flicker of interest in their faces. Though thinking back on it, I cannot rule out the possibility that bacon was involved.

Posted at 11:41 AM in What Passes for Parenting | Permalink

I.am.so.sad. How could you continue? You are so brave to decide to live. Hold it, I'm weeping for you. Give me a minute.

Okay, back, BTW, we cooks call bacon strips lardons. So much more fancy that way.

Also, looks like we're back to full nostril shots in our pictures. But, I'm loving your hair that length and color. I know it's not your "real" color, but shit, how can Snow "White" have black hair? How does that happen?

Good god. You are as easily distracted as a teenager in a room full of bacon. Which is also the name of my hair color.

Well that’s a weird coincidence, because Room Full Of Bacon is the name of my cover band. Or will be when I get around to starting it.

Anyway, that link was my first exposure to Katy Perry and all I really have to say is, thanks for accelerating my oncoming mid-life crisis. Although come to think of it, I have been self medicating with 80’s music for a while now so maybe it’s not all her fault.

It is also the title of my forthcoming parenting manual. Though I am also considering All the Money in the World.

hey there, sent over to your fabulous blog by audubon ron. he was right, you are a classic read. =)

you cracked me up. i would not repeat my teen years for anything. too many face-to-face conversations where they catch every weird look or nervous hiccup..all the things you can hide over text and email these days. =)