« In which I run out of paper trying to solve the latest beauty formula and a math geek has the last laugh. As always. | Main | The word of the day is flimflam »

It took them half a century but the people at Mattel finally figured out that a plastic six-pack and a pair of shiny plastic biceps could not make up for the fact that when it came to talking to women, Ken was in way over his plastic head. 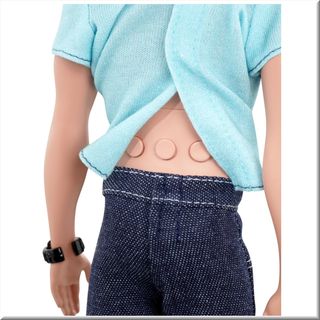 It wasn't entirely his fault. Ken was cast in the role of a character actor; built to disappear into whatever story line generations of girls could project onto him.

On his own, however, Ken fell into the same plastic traps over and over again.

"Does this dress make me look fat?" asked College Barbie. "Do you think my friends are pretty?"

"Have you given any thought to where this is going?" asked Late Twenties Barbie. "Do you see yourself ever having children?"

"Is that what you're wearing?" Early Thirties Barbie wanted to know. "Are those really your friends?"

Late Thirties Barbie was relentless: "Where are the fucking juiceboxes? Did you remember to buy diapers? Did you have a good sleep?"

Decade by decade, Ken made the mistake of taking each query at face value.  Sadly, just when Ken had started to pick up on the existence of subtext, Over-40 Barbie had pretty much stopped talking to him to altogether.

But thanks to a little microphone near his heart, three buttons on his back and the ability to play back a recorded message, the newest Ken on the shelf can look forward to a lifetime of doll-wooing in which all of his lines will be fed to him in 5-second bursts of exactly what she wants to hear.

"Sweet Talking Ken" can't lose! He will always know the right thing to say: "Instead of badgering you for sex this morning, Late Thirties Barbie, I'm taking the kids to the park. Why don't you sleep in a little?"

All of which has got to feel a little unfair to Old Ken, not that we will ever know. He doesn't really like to talk about his feelings.

From The Secret Life of the Suburban Man Archives:   Home Improvement Television

Posted at 06:44 PM in Ask the Suburban Kamikaze | Permalink

Oh my darnit. Brilliant. I'm reading it again, just 'cause.

With what I got up to during my formative years with those poor dolls, it's better that mine couldn't talk. Those recordings would have been...incriminating. I couldn't help it! Those dolls aren't molded in a manner that makes you think "Oh, wow, this one's a deep thinker, and that one's really shy." They're 10s with big smiles and removable clothes! I was just responding to the signs! They were asking for it!

...When did I become Kana the Defensive Rapist?

We need to pair talking Ken up with a Mr. Wonderful doll so he can learn a thing or two.

The doll's brilliant. He says things like, "I don't know honey, let's pull over and I'll ask for directions."