« In other news: If you are looking to the makers of "Cheez Whiz" for food recommendations, maybe someone else in your family should be doing the shopping. | Main | Chicago: Shark free all winter long »

Mr. Kamikaze and I have an ongoing debate on the subject of driving in reverse. 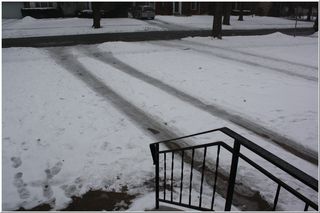 But it is more than academic now that Boy, Esq. is learning to drive.

This is a stage of parenting in which unresolved marital issues tend to resurrect themselves like zombie pedestrians in the crosswalk.

Leaving aside his refusal to acknowledge the number of times over the years in which I have saved our lives by pointing out his errors from the passenger seat, the bottom line is this:

I spend as much time backing out of the driveway in a day as certain train-riding people spend behind the wheel all month.

It begins at 5:30 a.m. and continues throughout the day, under conditions certain train-riding people could not imagine. I back up in good weather and bad - a distinction so marginal as to be practically meaningless in Chicago.  I back up before I have brushed my teeth or my hair and again afterward. I back up while reciting the daily schedule, arguing about chores and handing out lunch money. Some days I back up in the process of discovering I have no money. Then I have to back up while writing a check.

I back up by myself and I back up with a passenger load of middle school girls so loud you can almost hear them over the blaring Justin Bieber soundtrack. I back up while turning the radio down; I back up threatening to turn it off.

So when Mr. Kamikaze tells me I am doing it wrong because my head is turned over my left shoulder instead of over my right, I laugh so hard I nearly back up into the garbage cans.

From the Other Stuff I am Right About archives: "Missing" soy sauce discovered in refrigerator exactly where wife said it would be, A palm tree means never having to say you're sorry

Posted at 05:55 AM in Ask the Suburban Kamikaze | Permalink

Um, I've ridden with you and I would prefer not to be in the passenger seat when you are backing up or going forward. Let your husband teach the kid to drive.

The Midwest has made you soft. Everyone in Miami shaves their legs while driving. It's no big deal.

Reminds me of the scene in Talladega Nights where Ricky Bobby's dad drives his laboring mom to the hospital FAST -- and in reverse.

Though from the title of this post, I thought you were going to tell us you're pregnant.

Mr. Kamikaze: Dude, be thankful Mrs. Kamikaze is looking back. My Little Woman “Happy Feet”, as I call her driving persona, applies makeup while navigating the car in the reverse. One of the main dividends of owing acreage is never having to engage the reverse gear. Simple, just use the front driveway which circles to the back driveway and point the grill to the road. What does happy feet do? She barrels down the back driveway and damn near parks her Honda in the washroom.

Having been in the car with both of you when driving in reverse in icy conditions, I have to say that this is perhaps the one time I prefer your driving -- his "haul ass to avoid slippage" philosophy is questionable to say the least.

truly the quote of the day... or week or even year if things don't pick up.

You're supposed to turn your head when you're backing up? Well then why did God put those mirrors all over the car (besides for makeup application, I mean)?
I am suspicious that Mr. Kamikaze's objection to your technique has something to do with his concern that you're backing up while burdened by those twin distractions, a uterus and ovaries.

Oh SK, this is painful for me.

Because your emotional and moral standing is so clearly superior here, I want to agree with you. I really, really do.

Sadly, you are wrong and he is right -- objectively, irrefragably right to a metaphysical certainty.

Unless -- oh could it be? -- you are driving a vehicle manufactured in the UK with right-hand drive.

But you're not, are you?

I have been reading English spy thrillers, does that count?

Also, I just looked up "irrefragably" and it does not mean "being an asshole," so I can't really see how that applies in this context.

I've ridden with both of you as well, in forward and reverse and I have to say, hands down-----I prefer my driving? Seriously, you used to let small children jump up and down on the roof of the SUV and, though no specific incident comes to mind, I suspect Mr SK doesn't look over either shoulder because he is usually backing out with plywood, paint, trusses and roof beams strapped to the trunk. He needs a periscope and a red flag. As to which shoulder is the correct one to look back from, I don't believe in looking back and really, I don't think it matters if you back quickly enough and have a very loud horn. It's all about the timing.

Exactly. Looking over your shoulder is no way to live.
I am pretty sure Gandhi said that. But it might have been Fleetwood Mac.