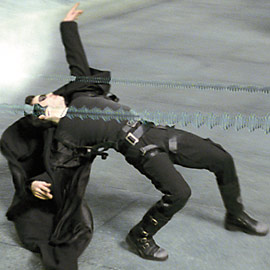 Dearest SK: I am the Oracle. Listen to me. The energy that flows through the universe has a way of filling the void of nothing and of righting all wrongs. He will marry a cute little quiet type. She will be full of hope and prospect. Only she will soon learn somewhere between the “I do’s” and the first load of trash to be taken to the street that she married the master of nothing. This once quiet and hopeful girl will transform overnight into a passive-aggressive, stay-on-his-rear-end-type with a tiger-like fierceness and she will nag the ever loving snot out of him. He will call his mother. The daughter-in-law will even ransom sex for favor. She will hate you at first and blame you for his shortcomings until the day you privately have coffee with her in the kitchen and where you will open a box containing all the post-it notes left on doors, refrigerators and bathroom mirrors reminding him of his chores. You shall say, “Trinity my dear, you know what you must do.” He will come home and find all those notes placed back in their rightful places on doors, refrigerators and mirrors. On the kitchen table he will find his dinner - a single can of unopened tuna and a fork. And she will say, “It’s isn’t like you weren’t warned.” The End

This was beautiful. It made me weep.

I'm going to suggest to my 17-year-old that he read it, if only so he can NOT read it, and thus not do one more thing.

I am weeping for my future.

There is nothing to be done about it.

All I can say is "nothing lasts."

Almost nothing. I'm pretty sure the stains will be with us forever.

One can only hope for future retribution in old age.