« It's the least he can do | Main | License to spill: We indulge our fetish for secret agents and compose Christmas greetings on a cocktail napkin »

A good man is hard to repel 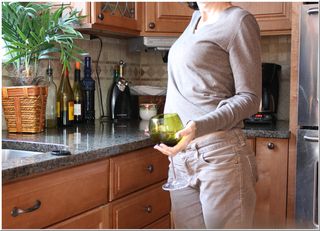 "That's not what I said," he objects.

So I'm paraphrasing a little.

Mr. Kamikaze puts corduroy in the category of man repellent.

Whatever. The point is -

"The point is," he says, "corduroys are not lingerie.  I have a problem with you wearing them to bed."  Also, he says, there is no such thing as man repellent.

"Corduroy looks just as good puddled on the floor as any other article of clothing."

Here is how little Mr. Kamikaze knows:  The New York Times describes an entire fashion movement built up around the idea of man-repellent.  From dangerous looking jewelry to harem pants, the fashion world is embracing a trend that dispenses with the idea of fashion as man-bait, or even man-acceptable in favor of knowingly repulsive to men.

"I'm really happy that people understand that man-repelling is a good thing," says the fashion blogger credited with inspiring the trend.

I am not making this up.  I am also not wearing anything under my corduroys.

Okay that last part is not true.  But here is a fact: Mr. Kamikaze spent most of the night up on the roof stringing Christmas lights in 11 degree weather. As if there were not enough reasons to despise the holidays, now Jesus leaves me pining in my corduroys and tights for a man on the roof.

And that, apparently, is what is known as a fashion triumph.

Mr. Lush says, 'True. There's no such thing as a man repellent.'

I don't know, even Victoria's Secret has gone corduroy. Perhaps they are bored with the man attracting business and can see a better business model in the man repelling business, I don't know, either way corduroy is "hot" but check here:

Sorry, totally forgot how to make that clickable...

Ohio is the new Milan. You read it here first.

I, on the other hand, have nothing to say on the matter and will not post a comment. I just don't interfere in domestic disputes. Just make sure you have something on when you stand in the window.

I do not even shower naked until May.

I bet my next non-winning powerball ticket that back in '77, young master K would have not been so repelled by a cute Farrah Fawcett feather-do topping off a nice fitting pair of maroon Levi cords on some cheerleader's butt.

No kidding. I could never get that hairstyle right. But I swear, I totally rock the cords. And not in a "Hot in Cleveland" kind of way.
So what the hell was he doing up on the roof?

Cords can be plenty sexy. But they are a bad choice when the kids are in the house -- noisy, don't you know.

You folks can have your silly fashion trends, I will stick with the classics.
Flannel. Many, many layers of flannel.

At a certain point the only thing that really keeps me warm is luggage.

I think this look :Corduroy is sexy and soft...Nice look Suburban!!!

I will take that as a vote of approval for my plan to wear nothing else until June, or Miami, whichever comes first.

All I can say is I see young singers come and go in the work I do, and to be honest, cords really make you look young and youthful!!! He needs to appreciate how good he's got it...