Wednesday night New York Times dinners began, as so many traditions in our family, as an exercise in aspiration.

Why shouldn't my family be capable of one meal a week in which our tastes were challenged, our horizons broadened, our palates exposed to the style and sophistication I once believed were synonymous with family life?  There are too many reasons to list here. 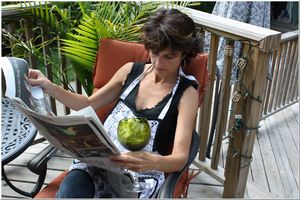 Still, there were unexpected bonuses.

The sheer hostility with which my efforts were greeted on what came to be known as "Goat Cheese and Radicchio Night" came to be a source of great satisfaction in my week.

I had no idea it would annoy them so much, which of course, is what gives any good family tradition its longevity.

Some weeks it is enough to taunt them by reading recipes aloud, randomly substituting "radicchio" and "goat cheese" for other ingredients.

Other Wednesdays are given over to vicarious cooking, in which I devour the French method of making eggplant stew while sipping Bordeaux on the back deck in my toile de Jouy apron.

But one way or another, the tradition has persisted with all of the joy and spirit of such Midwestern conventions as Enforced Family Board Game Night.

Today, however, it seems the New York Times has turned the dining tables on me. The front of the Dining section features an entree so vile it could only have been popularized by middle schoolers.

I didn't know the spaghetti taco had its origins in a television show, but this dish has been showing up in my kitchen since 12-year-old girls started making their home there last year.  Apparently it's not just happening in my kitchen; it's now a staple of pre-teen cuisine.

It's a safe bet that the 7th grader will hold me to tradition tonight.

The only question is, how is goat cheese and radicchio going to taste on a spaghetti-filled taco?

From the passive-aggressive cookbook archives: The Secret Ingredient is Spite

Posted at 12:56 PM in Casserole Recipes and Laundry Tips | Permalink

Pretty much like goat cheese and radicchio always tastes. (I'll be sharing this hilarious post with a chef in the family, and possibly starting my own Octopus Salad Thursday tradition).

What time should I be there?