I was going to buy him an ice cream cone, but now I think I am going to have to kill him instead

A teenager reflects on the consequences of pissing off his mother: 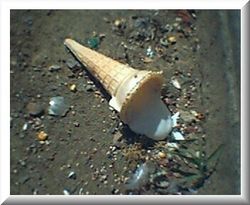 "I peg it at a week at most. Your blind rage will have died down and you'll realize you're being completely retarded and after that you'll forget and then you'll remember about four months later and use it in some argument that is completely irrelevant...

There will be nominal costs in things you said you were going to do for me and then you decide not to do. 'Oh, I was going to buy you an ice cream cone and now I'm not.'  "

Posted at 11:49 AM in What Passes for Parenting | Permalink

On the upside, he can use the phrase "nominal costs" correctly in a sentence.

On the downside, he called you "retarded" (oh, several downsides there, not least of which is NO MORE ICE CREAM CONES FOR A WHOLE WEEK, BUDDY!)

I admire your blind rage, though sources tell me it's a little retarded at times.

This is what happens when you mix a semester of microeconomics into a teenager's world view.

You haven't suffered until you've been trapped in a car with a 15-year-old holding forth on the unfair opportunity costs being imposed upon him by his parents...