« This just in from the suburban traffic desk | Main | Multicolored Ikea scrubbers to launch new age of cleanliness, order and household cooperation »

The man and his wife had never liked the Russian olive tree in the front yard. They were the wrong kind of olives, possibly.

They make a call, and men in trucks with ladders come out and take the tree away. Branch by branch, the olive tree disappears, until at last there is nothing left but the part that anchors it to its place in the earth just outside the nation's capital.

The man looks at what is left and begins to think about his tools. Why not send the men in trucks away and unearth the stump himself? 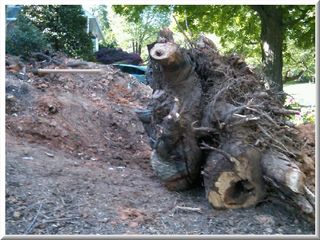 It is, on some levels, a defensible choice. There is $800 to be saved, and how hard could it be?

Perhaps some subtle spiritual imperative drives him. Hasn't he also put his roots down in this place? He could honor the tree with his labor. But it is more likely he simply turns his hands over and contemplates the buttery soft skin of his palms. How hard can it be?

Like any self-respecting, suburban, land-owning, family man and card-carrying member of the national press corps, he has a hatchet, a shovel and a pick mattock. Also a lot of pens. Which are utterly useless against a Russian olive tree, as it turns out.

But let me tell you, this would be a whole different story without the pick-mattock. Depending on whatever that is.

The point is, every so often a man has got to wield the pick-a-matic. This was one of those times.

He is nine, maybe ten shovelfuls into the earth when it occurs to him that he might not make it. He pushes the sweat back from his face with the now slightly less buttery palms of his hands and wrestles with his doubt. All of his training, his preparation, the venti mocha regimen, would it be enough?  But he knows there is no turning back. The realization hits him with the force of three strategically placed sticks of dynamite. "You can't just shovel the dirt back over the stump," he says.

On the second day he discovers he can stand on the stump and make it wiggle. "You think you're getting close," he says, recalling the brief moment of hope and fancy footwork.

But the stump has other plans. It will hold out for another day. The man grows tired. His muscles ache, his once buttery-soft hands are blistered. But it is the loneliness that nearly defeats him.  His wife does not come out to admire him. Nor do any of the neighbors. It is just him against the goddamn stump, which he is now convinced is held in place by a root system whose tentacles reach into the highest levels of the United States government.

With the persistence of a thing powered by gasoline and designed to grind down all resistance, he applies shovel, hatchet, pick-a-majig and wiggling to the task. He does not talk to the stump, but cannot escape his awareness of what goes unsaid. The danger of literary metaphor hovers over him like a chain saw.  On the third day, the stump comes out.  Also, a neighbor, who stops by to narrate the process by which something called a "stump grinder" would have done the job in roughly three days less time. The man's wife also struggles to appreciate the effort, or as she calls it, "what could have been done with a machine in two hours."

This does not diminish the suburban man's satisfaction in the least. "You do a job, you're very pleased, you fill in the hole," he says. "There's no monument, no testament to the hard work."

Except, as his wife points out, there is the stump itself, which even now sits in the man's garage.

Posted at 05:45 AM in Secret Life of Suburban Man | Permalink

Men are so good at digging out the current stump and filling the hole themselves. Rarely, however, do they keep the old stump around.

If it were me, I would have just gotten another quote for stump removal. Around here, it's never more than $50-100 for some guys with a stump grinder to do the job in about 10 minutes.

But if it were me, I also wouldn't tell my Suburban Man that after he'd removed the thing by hand.

I am pretty sure it was never really about the money.