A crusty old New England contractor is getting ready to install a sliding glass panel for the hapless suburban couple whose ancient basement door is falling apart.

It is the kind of drama for which the big screen television was invented.

It's a repeat. Maybe not this exact episode, because who can tell them apart? But it is safe to say that This Old House master contractor Tom Silva has shown his television audience how to put in a door a time or two before.  Not to mention that among his viewers, door framing procedures do not rank among life's mysteries. Mr. Kamikaze could do it during the commercial break.

And yet, here he is, sealed to his easy chair as firmly as if he had been applied with a nice thick bead of caulk. He follows each step with the focus of a man who has spent his whole life contemplating the merits of the solid vinyl door jamb.

As the beneficiary of so much home improvement, I make an effort to share his appreciation. I pretend to watch. I ask questions. Why the hell are you watching this? Do you want me to tell you how it ends?  Doesn't anybody ever get naked on this show?

And by long and careful observation, includng countless screenings of the classic Toilet Replacement Cliffhanger episodes, I have learned to identify the moments of hidden drama in the renovation script. Is that a load-bearing wall? Can that foundation be shored up or will the entire house have to be lifted up on jacks - a contingency PBS will parcel out over six episodes?

And therein lies the secret, which, if you are willing to show sufficient interest in the range of options for door hardware, the suburban man will share with you:

"Sometimes they find things they didn't expect," he says. "Decisions have to be made." 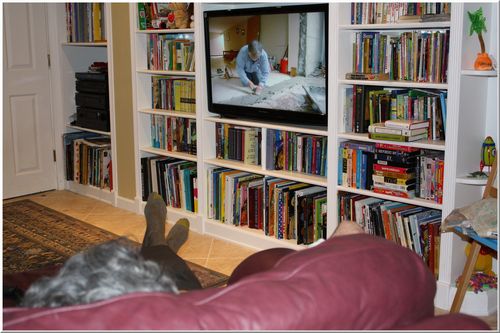 Posted at 10:41 AM in Secret Life of Suburban Man | Permalink

Are you reading The Mysterious Benedict Society located on the third shelf on the right? Incident at the Dutch Library has scandal and intrigue. You are so deep.

I am not, but the series got strong reviews from the sixth-grader.

Would you say this was a nightmare? No, I mean would you say it? Sounds like something to stay up for at night.

Someone erased all my carefully-DVR'd classic Toilet Replacement Cliffhanger episodes. I feel so alone.