The Underachiever's Guide to the Zombie Apocalypse

If there is one thing I have learned in my years as household manager and valet to a family of barbarians, it is this: the middle school's Dress Up Like a Tudor in an Authentic Costume Your Mom Must Produce from Scratch Day will be scheduled during the same week in which you are expecting 25 guests and the hormone combination drama known as PMS versus Teenager.

Also: No one is ever going to move the enormous pile of wet towels covering the floor to a laundry basket no matter how many Post-It notes you attach. 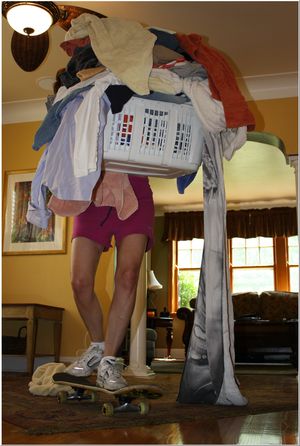 So I take it for granted that in the event I am faced with an approaching horde of the ravenous undead between dinner and Last Minute Homework Emergency Hour, I can handle it.

Please. I have teenagers. Your oozing, undead faces pressed against the glass do not scare me. I knew something like this would happen the minute I got around to cleaning the windows.

Plus I work out.  As a result of my two, sometimes three-day a week regimen with the little weights I bought at Target, I have a achieved the ultimate fitness goal of every 40-something mom in the suburbs: No upper arm jiggle.

So, yeah. Bring on the zombies.

But a half hour on the telephone with Rich Gatz dispels any fantasy I may have had about kicking ass and taking zombie names. Gatz is a 28-year old fitness fanatic who runs the apocalypse-themed Zombiefit program in St. Charles, a leafy riverfront suburb on the western edge of Chicagoland.

I read about the program in Wired magazine and I call him immediately. If there are zombies in the suburbs, I need to know.

Gatz's students undergo intensive strength training and conditioning combined with parkour, which is the art of being able to escape James Bond in a footrace that winds its way up, over or around any obstacles in a path through the world's most beautiful cities.

The goal of Zombiefit students is to be able to outrun, outclimb and outmaneuver any creature or obstacle in their path as they flee the relentless hordes of undead that may or may not already have a foothold in the Midwestern suburbs.

And with block party season upon us, you really can't be too careful. "If you're ready for the zombie apocalypse, you're reading for anything," says Gatz. Which presumably includes side dishes made with green Jell-O.

I watch the video and realize I am a zombie side dish. Gatz as much as tells me so.  There are people who work out a few times a week, look pretty good in a bathing suit, but can't do a single pull-up, he says. He doesn't mention the Target hand weights, or the Ralph Lauren bikini, but I know he is talking about me.

Well, I say defensively, I do a lot of ice skating.  That's got to count for something.

"If zombies come, hell might freeze over," he says, which is not meant to be encouraging.

But I watch the video again and realize that my whole life is an exercise in parkour.

A mountain of laundry and two flights of stairs lie between me and the washing machine. There is a skateboard in the middle of the living room and someone has left every cabinet door in the kitchen wide open, which I can't see because I am carrying 45 pounds of groceries and a backpack.

I don't have to imagine zombies because my house is crawling with middle school girls. As soon as they hear my footsteps they swarm around me, demanding to be fed.

And if you think zombies are relentless, you have never been between a 15-year-old and the last remaining bit of currency in your wallet.

Posted at 10:49 AM in The Underachiever's Guide to Everything Worth Doing (Halfway) | Permalink

Don't think I don't know who that upper arm jiggle line is aimed at. I'll see your Target weights and raise you a tricep machine at Bally's. We'll see who can do a pullup.

You've got nothing to worry about. Organizing and delegating are key zombie defense skills. You can assign an entire committee of people to do your pull-ups for you.