« You can't top this pizza | Main | 17 Rules Every Blogger Should Know, Part Three »

CANDYLAND - In an effort to break up what has been described as a major slumber party racket infiltrating the suburban Midwest, authorities say they will impose a new limit on the maximum number of sixth-grade girls allowed for non-birthday sleepover events.

The harsh measures come in the wake of a series of increasingly elaborate entertainment schemes perpetrated by a group of 12-year-old girls suspected of operating a party ring based in the Chicago suburbs. 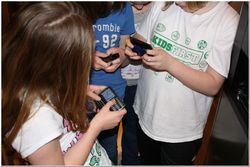 Most recently, the group is said to have organized a massive surprise birthday party for one syndicate member by luring "Jamie's" mom into hosting what she believed was an ordinary Friday night sleepover.

The mother, who believed she had agreed only to allow "Amelia" or possibly "Elizabeth" to spend the night, later learned that as many as a dozen girls had been invited to attend a pizza, ice cream and all-night pedicure dance party at her house in honor of Amelia's  "birthday."

Authorities say the scheme was interrupted after some mothers balked at their daughter's insistence on the purchase of Coach brand accessories as birthday gifts.

The operation has its roots in a fifth-grade con in which syndicate members conspired to inflate the hours of legitimate birthday parties by inviting guests to come early and stay late as part of a phony set up and cleaning crew.

Authorities warned parents to be vigilant for signs of party plotting, which may include requests for cake mixes, a surge in text messaging and a heightened sense of drama surrounding the issue of whether Haley is still mad at Anne.

Related conspiracies: Whoever came up with the idea that creativity should be encouraged probably did not have 11-year-old girls

Posted at 06:33 AM in Dateline: Suburbia | Permalink

You are approaching this the wrong way, Amateur. Form your own group, not a syndicate, more of a SWAT team, to respond to these underhanded tactics. Do not try to nip it in the bud, that will only put things off until the next party. When a parent finds herself the victim of a party scam, she calls in the SK SWAT team, who show up at the besieged domicile and proceed to party right along with the girls, matching them squeal for squeal and more importantly, asking children who are not their daughters how they're doing in school, do they have any boyfriends and what they'll be doing this summer. If any of the SWAT team happen to bring wine along, unfortunately the person who called in the SWAT team won't be able to get ANYONE out of the house, but after awhile no one but the severely humiliated children will care. You're welcome.