Family members have apparently used my illness as an opportunity for a three-day laundry and recycling holiday.  An astonishing number of mostly empty milk jugs line the basement stairway, infusing the air with a scent so tangible it nearly masks the undercurrent of abandoned laundry just below. 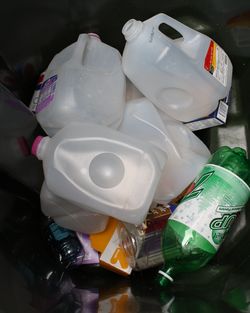 There is a lot of catching up to do. Three days on the 7-up diet have left me behind the curve. Unfortunately, curves rule this season, according to The New York Times fashion review. Also, "breasts are back."

Catching up on world news, I learn that the Japanese are not eXactlY up to speed on the process of gender selection:  Crown Prince Naruhito "shared the blame for his wife's failure" to produce a male heir to the throne, the Times reports.

But who can snicker at such foolishness after learning that a cabal of Texas ideologues fuming over history's failure to recognize Jesus' role in writing the Constitution have won their fight to wedge Jerry Falwell, the National Rifle Association and a favorable view of Sen. Joseph McCarthy into middle and high school social studies textbooks?

These are people who believe that stuff like the civil rights movement and the New Deal unfairly overshadow such great American intellectual movements as the Moral Majority. Not that high school students won't enjoy it, but do Texas parents really want to relive the whole debate over the sexual orientation of the Teletubbies?

Among other changes, the group wants students to learn that the civil rights movement "created unrealistic expectations" and that reports of McCarthy era overreaching and anti-Japanese racism during World War II are exaggerated and frankly, beside the point, when you consider the enormous contributions of people like St. Thomas Aquinas.*

*Jefferson was replaced on a list of inspirational writers apparently because his role in establishing the concept of church/state separation irritates Texas Board of Education members.

Like Japanese criticism of a princess for her failure to produce male offspring, it's only funny until you realize these people are serious.  Just not about history or social studies.  And even then, it's still more entertaining than the average social studies textbook.  The question is, will middle school students get the joke? They don't even notice sour milk when they are stepping over it.

Here is the real lesson kids: American adults can't even hold a civil conversation about social studies, let alone agree on how it should be taught. You may as well just settle in for a semester's worth of Hannity & Colmes reruns.  Take good notes.  This will be on the test.

Sounds like you're still a little scrambly from the flu. Sorry you were sick and I nearly fainted in surprise that your children didn't finish the laundry. I'm sure your husband, who must be out of town, would have taken care of you and the laundry.

Sadly, once Texas rewrites the books, schools across America will begin using them as well. Apparently, Texas is SO BIG and they order SO MANY text books, that what they order predetermines what publishers will print. Glad my kid will be out of HS after next year, but it does not bode well for the country I'm afraid.

Imagine Texas's and the textbook cabal's surprise when they find that no one uses textbooks anymore. They can pull up the actual news reports from the civil rights era and hear the actual tapes and read the actual transcripts of the McCarthy hearings and read all about Thomas Jefferson on the ... INTERNET....ooooo...they just didn't count on that!

Wow, sorry about the test book war. Hey, teachers only have an hour and it is likely most of what is being taught isn’t going to be remembered anyway.

Now for you flu, smelly household, curse thingamadewhickey. The new textbooks will teach your kids that the reason your house smells awful is because you are non-believer and deserving of the entire wrath of disbelief and small of hell. You’re going to hell in a laundry basket. Now, move closer to the screen so I can reach through and slap you really hard in the forehead ala Jerry Falwell and yell, “HEAL THY SELF!” Better now? Yeah, I know, it works on my TV every time.

I have been to Hell. The music was too loud and the drinks were ridiculously expensive, but it was a very fun crowd.

Hasn't Texas seceded yet? They keep promising to and then they don't go away.