"Once upon a time, men wore the pants. Men took charge because that's what they did." --Levi Strauss & Co. "Wear the Pants" campaign.

This is no time for cappuccino: Cities are crumbling, children are misbehaving and old ladies remain on one side of the street. 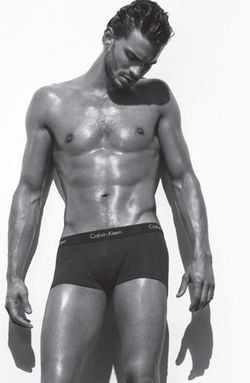 Thank god someone has the balls to step up. And we're not talking metaphorical balls here.

Because metaphors are for pussies. And Calvin Klein is not going to untie you from the railroad tracks.

We're talking about Levi Strauss & Co., whose new ad campaign for Dockers-brand pants champions the power of disaffected homophobic misogynists to save us from a world gone mad for salad and coffee drinks. If only they had the right pants. In nine new colors.

Levi Strauss global marketing skirt Jennifer Sey tells Brandweek what is at stake: Men, she says, are suffering from declining testosterone levels, a disproportionate share of job losses and confusion about their waxing options.

"This led us to the idea of an ad campaign encouraging men to put women, homosexuals and anyone else who stood in the way of pure, unadulterated patriarchy back in their place.  Also, khakis with gun belts."

Photo:  Confused about his pants options.

Posted at 11:15 AM in Secret Life of Suburban Man | Permalink

That’s funny coming from a company that was once an American Company but moved 11 of its manufacturing companies offshore to Mexico and Central America to be precise and killed 6,000 US jobs. Maybe they need more testosterone in Central America. That’s why I’m a Wrangler man.

Incidentally, I don’t wear underwear. No gun belt is going to holster this weapon, I’m packing real heat. (You set that up, not me).

I see that testosterone levels can be increased with those roomy pleated Dockers, the kind that allow the balls to swing freely and for a man to scratch himself at will under the guise of the pleats.

The BrandWeek interview is so lame. It doesn't even address the issue of the sexism in the ad campaign.

I can tell you exactly which pants he shouldn't be wearing...RAWR. (Sorry. It's been a while since I've seen abs like that.)

Since when do Dockers signal manliness? The Marlboro Man didn't wear Dockers. Neither did Chuck Norris. (You knew I was going to have to throw him in there, didn't you?)

The man in this photo is a professional tennis player who demonstrates his masculinity by shoving tennis balls down his opponents throats. Okay maybe not the best way to put it....